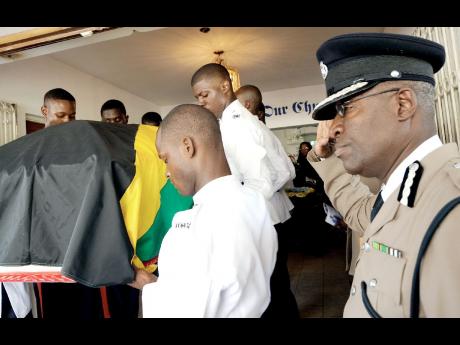 TOUGH TALK shattered the sombre mood at the thanksgiving ceremony of slain police Corporal Miguel Cuff as federation chairman, Corporal Raymond Wilson, rallied members of the constabulary to action, calling on them to take the fight to criminals.

"Let us rearm ourselves with the authority of the law, and for every step that these criminals advance towards us, let us take 10 steps towards them. We have a job to do, and the criminals cannot win," he said.

The federation chairman, addressing hundreds of mourners at the Constant Spring Seventh-day Adventist Church, described Cuff as a visionary of the force.

He said the execution-style shooting of Cuff has caused the ranks of the force much pain.

"Today, there is no doubt that we are hurting. We have sworn to serve and preserve the lives of all Jamaicans, but it appears that nowadays the word 'police' has taken on a new meaning. It appears that once you are declared police it means instant death by the most gruesome means."

National Security Minister Dwight Nelson, in a written address read by a member of the force, said, "I am supported by any legal action by the police to end the barbarity that is becoming too common place."

Cuff was shot dead in the Southboro community of Portmore, St Catherine, on February 22.