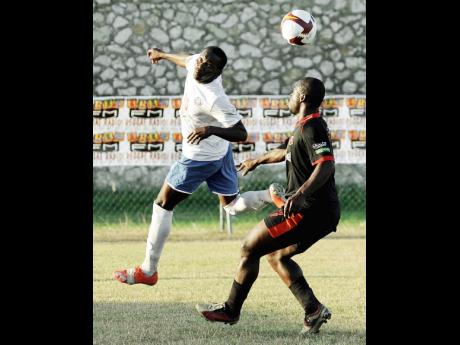 The homesters, Rivoli, are currently sixth and pushing to cement a place among that grouping for the fourth round, which would be a first for the Spanish Town team.

"I am pleased with the result. The team played well and if Hodges got the support needed, we would have got the three points," said Oniel Thomas, Rivoli's coach.

Portmore United, on the other hand, have won the Premier League on several occasions. However, they have been struggling this season and are currently third from bottom in the standings.

They are in this lowly position, despite playing strongly in recent times to win three and now draw in their last four games.

Neville 'Bertis' Bell, Portmore's coach, said: "We played very well. I would have felt better if we had more points, but a point is a point and our aim is is to be in the top six."

The Rivoli aggregation played cohesively and built most of their attacks around Barrington Planter, Kirk Ramsey, Valentine Gardener and Devon Hodges.

As the teams did their early assessment, Portmore took no chances in ensuring that Hodges was closely marked by Anthony Modeste and Adrian Mitchell.

Both teams gradually pieced together their attacking game and got increasingly bolder in their attacking forays. However, they only served up a variety of close misses in a goalless passage to half-time.

The effort was no different in the second half, and at one stage, Portmore sought a way through with long passes aimed at Roen Nelson. They even tried making an advantage by switching personnel, with Ricardo Webb replacing Ricardo Cousins, Steven Morrissey for Tremaine Stewart and Kemeel Wolfe substituting Mario Swaby.

Nothing, however, could change the result, which saw Portmore moving to 34 points and Rivoli advancing to 37.