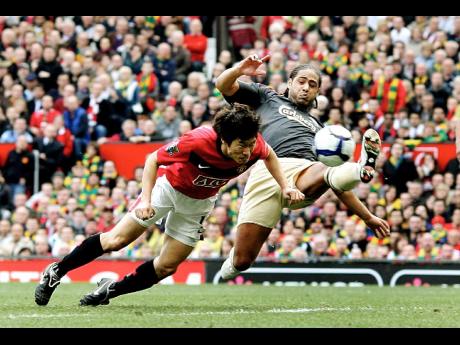 Ji-sung Park headed Manchester United back to the English Premier League summit as the champions came from behind to beat Liverpool 2-1 yesterday in an ill-tempered clash between the northwest rivals, while Chelsea lost ground with a 1-1 draw at Blackburn..

"To come back and win is a great quality Manchester United have," United manager Alex Ferguson said. "For periods of the game we played very well. For others, we had to dig and concentrate. A game like that is always going to be feisty."

Referee Howard Webb pointed to the spot despite Javier Mascherano's grabbing of Antonio Valencia starting outside the area and Liverpool manager Rafa Benitez accused the Ecuador winger of diving.

"It is clear that there is contact, but the way he fell down was strange," Benitez said.

Wayne Rooney's penalty was saved by Pepe Reina, but the England striker ended a 962-minute goal drought against Liverpool by burying the rebound.

It was a key win for United, who are hoping to surpass Liverpool's haul of English championship crowns by winning a fourth straight Premier League title and 19 in total.

Ferguson made clear his objective to "knock Liverpool off their perch" after taking charge of United in 1986 and the 68-year-old Scot repeated the aim in his programme notes yesterday.

For a team that pushed United all season in the 2009 title race, Liverpool's more modest ambitions amount to merely finishing in the top four to qualify for the lucrative Champions League.

The pursuit of a fourth straight win over United couldn't have started any better for the visitors with Torres starting the counterattack and ending it by beating Edwin van der Sar.

After United midfielder Michael Carrick lost possession on the halfway line, Torres' backheel released Steven Gerrard to gallop forward before the captain picked out Dirk Kuyt on the right flank.

With United defenders Rio Ferdinand and Gary Neville leaving Torres unmarked six yards from goal, Kuyt whipped in a cross for the Spain striker to net his 18th goal of an injury-plagued season.

But the lead lasted just seven minutes as United leveled in circumstances that led to tempers flaring on the touchline between Ferguson and Liverpool counterpart Rafa Benitez.

Benitez was angered by the awarding of the penalty, while Ferguson felt Mascherano should have been sent off for blocking Valencia's chance of scoring.

"The penalty kick decision was a red card because I do not see how anyone could have stopped Valencia from shooting," Ferguson said. "That is a goalscoring opportunity."

But Valencia was approaching from an angle and centre back Jamie Carragher could have intervened with a challenge.

A finger-jabbing Ferguson charged at Benitez and the pair had to be separated by fourth official Andre Marriner, while United captain Gary Neville also squared up to Jamie Carragher.

It set the tone for the rest of the match.

One battle United won regularly was Valencia's contest with Liverpool full back Emiliano Insua. After Valencia had outmuscled Insua in the 23rd minute, he delivered a precision cross to Park, but the South Korean's connection lacked direction.

Torres received his fifth yellow card in seven matches for a late challenge on Park, while Carragher was booked for fouling Fletcher in first-half stoppage time.

The industrious Park helped to maintain United's dominance after the break, while also supporting lone striker Rooney. A tame strike from Park was easily saved by Reina, but the Spain goalkeeper could not stop the low diving header on the hour after the midfielder ghosted in to meet Fletcher's cross - securing the three points for United.

"Park's such a great little lad that his courage got him the goal," Ferguson said. "We can give him roles to play because of his intelligence and discipline."

Ferguson gave a lot of credit for the victory to Fletcher, who has been ruled out of the last three losses to Liverpool through injury or illness.

"He was born with a natural energy, that's very important," Ferguson said. "He covers every inch of the ground. He does an unbelievable game for us."

Didier Drogba put Chelsea ahead in the sixth minute at Blackburn but a header by El-Hadji Diouf gave the hosts a point. The draw means Chelsea are now four points behind United and two behind Arsenal, but with a game in hand on both. Arsenal beat West Ham 2-0 on Saturday.

"It's a difficult moment now," said Chelsea manager Carlo Ancelotti, whose team were also knocked out of the Champions League by Inter Milan on Tuesday.

"We are in third position and we are behind now. We have to run more, but we don't have to lose our confidence."

In its game in hand, Chelsea can move within a point of United by winning at last-place Portsmouth on Wednesday.

Chelsea moved ahead when Nicolas Anelka burst down the left and provided the cross for Drogba to score with a low left-footed shot for his 28th league and cup goal of the season.

But mid-standings Blackburn refused to give in and Diouf collected a point for his side with a 70th-minute header at the far post from Michel Salgado's cross.

Manchester City won 2-1 at Fulham to move up to fifth, two points behind Tottenham with a game in hand.

Man City defender Joleon Lescott pulled out of the game after he injured a hamstring while warming up, but his side went 2-0 ahead by the 36th minute through Roque Santa Cruz and Carlos Tevez.