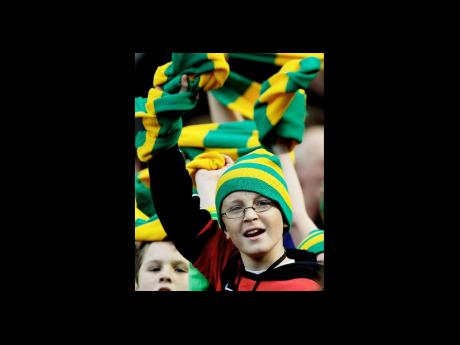 Manchester United fans are seen waving green and yellow scarves, the colour adopted by supporters who are protesting against the club's owners, before the team's English Premier League soccer match against Liverpool at Old Trafford Stadium, Manchester, England, yesterday. - AP

Fans of Manchester United and Liverpool, the English Premier League's fiercest rivals, are linked in a common cause: anger at American owners who have turned English football's most successful clubs into the most indebted.

While a tight match yesterday kept the anti-American chants to a minimum during Manchester United's 2-1 victory over Liverpool, green-and-gold protest scarves were everywhere, except the directors' seating, at the 76,000-seat Old Trafford stadium.

The protesters have even won government support, with Prime Minister Gordon Brown complaining that in soccer "debt levels have been at a leverage level that is too high".

But United club secretary Ken Ramsden dismissed protests by both sets of fans, telling The Associated Press: "It's all about the football played on the field, not in the boardrooms."

Liverpool fans have been directing bile at Tom Hicks and George Gillett Jr almost since the day their leveraged takeover was completed, three years ago. The Americans have ignored the hostility to remain in charge at Anfield, even though their stakes will be diluted by an external injection of at least $150 million urgently required to reduce the team's $356-million debt burden.

Liverpool's cash constraints and corresponding lack of investment in players have been brought into sharp focus this season by the dramatic downturn in the team's fortunes. Runners-up in the Premier League and Champions League quarter-finalists last season, Rafa Benitez's side is fifth domestically and crashed out of Europe's elite competition at the group stage.

How Liverpool fans envy the success - if not the debt - of Manchester United.

The Red Devils have won three straight league titles - matching Liverpool's record haul of 18 in May - while remaining on course for another, and a third straight European final.

But the Glazer family's 2005 takeover saw one of the world's most profitable clubs suddenly burdened by debt that currently stands at $1.06 billion - more than the total of Germany's top 36 clubs.

After initial grumbles, fan dissent lay largely dormant until January. Concern was voiced last year that only a quarter of the 80 million pound ($120 million) windfall from Cristiano Ronaldo's transfer to Real Madrid had been reinvested.

But the spark that reignited the anger was a 320-page prospectus sent in January to prospective buyers of bonds in United that laid bare the club's financial predicament.

The seven-year bond issue did raise 504 million pounds ($757 million) to replace long-term financing and reduce debts to hedge funds, but it also helped dissenting fans mobilise against the Glazers.

"The reason for the lull in the protests was that the initial campaign was to prevent a takeover and it did appear that the battle was lost," said Duncan Drasdo, chief executive of Manchester United Supporters Trust (MUST). "People felt there was nothing they could immediately do about it. We kept the organisation going, but it wasn't growing.

"But when the prospectus came out it made people sit up. It told the story we'd be telling prior - and since takeover - about what the Glazers would do with the financial management."

But the visual symbol of the protests is the simple scarf. In January, MUST began producing them in green-and-gold - the colors of Newton Heath, the club's original incarnation - rather than the usual red and black.

Supply can barely match demand and they dominate the stands at Old Trafford.

"The fans wear them because they love this club," defender Patrice Evra said. "They have their reasons for doing it and we don't think that they're crazy. They'd like things to change."

Manager Alex Ferguson, though, is alert to the dangers of a mass uprising.

"Some of our fans are clearly unhappy with our financial position, but we mustn't allow the situation to become divisive," Ferguson said. "I could see our opponents rubbing their hands with glee at the thought of watching us fall out among ourselves if we don't think carefully about what we are doing."