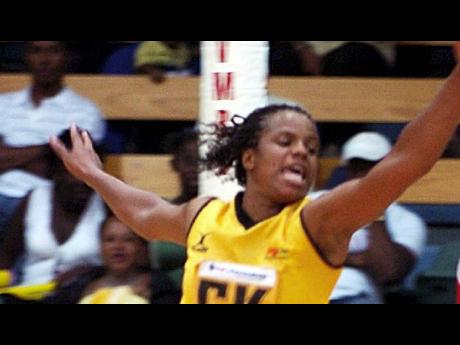 Only one of three Jamaicans taking part in the ANZ Championship was part of a winning outfit, when the new season got into full gear over the weekend.

Athletic defender Althea Byfield made her presence felt with a number of timely interceptions that helped the Northern Mystics to a 55-52 victory over the Adelaide Thunderbirds - whose line-up includes compatriot Carla Borrego - in the opening match on Friday in Auckland, New Zealand.

Willowy goalshooter Romelda Aiken met her match in the shooting circle, and her Queensland Firebirds stumbled at the first hurdle, when the NSW Swifts returned to the winners circle with a well-drilled 50-47 win on Saturday in Brisbane, Australia.

At the Trusts Stadium, Byfield may have been on the winning side, but 6-foot, 4-inch tall Borrego caught the eye in her debut for the Thunderbirds.

Borrego showed few signs of her six-year absence from netball while pursuing a basketball scholarship in the United States, with a fine all-round display.

The Mystics, however, eased out to a 15-12 lead at the end of the first quarter after a tight opening spell as both teams looked to find their flow. Matching Borrego in the height stakes, Kate Beveridge found herself thrust into the goal attack role for the Thunderbirds to accommodate Borrego.

The pair quickly settled into an impressive shooting unit highlighted by clinical finishing for the T-Birds, but the Mystics still held a 27-26 advantage at half-time after an absorbing second quarter tussle.

The match swung decisively in the third quarter, however, when Byfield combined expertly with Joline Henry to put Borrega and Beveridge under pressure and dominate the defensive rebounds.

The Mystics exerted some dominance as they surged to a 42-36 lead after three quarters, and retained their composure in the final stanza to start with an encouraging win.

Borrega finished with 40 goals from 47 attempts and Byfield had a strong defensive game with 10 deflections, four rebounds and four interceptions.

At the Gold Coast Convention Centre, Aiken, the reigning ANZ Championship Most Valuable Player, had her hands full dealing with England defender Sonia Mkoloma in the circle and was restricted to 29 goals from 33 attempts.

Lead at the first break

The Firebirds management would be delighted with the connection she made with new goal attack recruit, Natalie Medhurst, that helped to give their side a 13-12 lead at the first break.

But the Firebirds coughed up the advantage in the second period that began with the Swifts netting five unanswered goals to start the session.

This momentum, and Mkoloma's control of Aiken, helped the visitors to move into a 24-21 half-time lead.

The Firebirds fought back late in the third quarter, after the Swifts led by as many as six goals, but they could not close the gap and their opponents led 39-35 at the break.

Queensland rallied strongly to hit the front for the first time since the first quarter with six minutes to play, but the Swifts never panicked, regained the lead and held on down the stretch.

Next weekend, Mystics travel to Porirua, New Zealand, to face Central Pulse at the Te Rauparaha Arena on Friday, the same day that the T-birds host the Swifts at ETSA Park in Adelaide, Australia, where the Firebirds will visit Melbourne to meet the Vixens at Hisense Arena on Saturday.