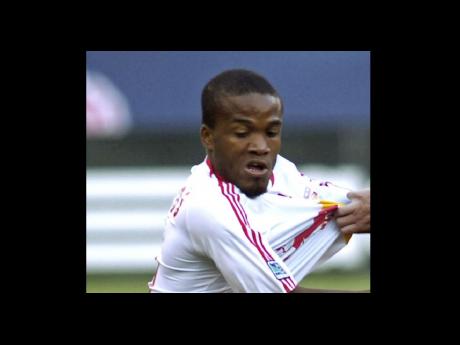 Jamaican Dane Richards was part of history on Saturday, when the New York Red Bulls christened their new 25,000-seater stadium with a 3-1 victory over top Brazilian club Santos.

The 26-year-old forward rounded off a first-half scoring blitz from the home team, when he followed up strikes from Joel Lindpere and veteran defender Mike Petke.

Richards helped the Red Bulls finish the half with a brilliant strike from the top of the box, after he latched onto a pass from Mac Kandji.

Estonian international Lindpere became the first Red Bull to score in the US$200-million new stadium after just 10 minutes, when he one-timed a rebound off his own direct-kick from just outside the penalty box.

The Red Bulls dominated play for long stretches in front of a sold-out crowd, and Petke gave the sold-out crowd more to cheer with a goal two minutes before half-time.

Midfielder Carl Robinson, a new acquisition from Toronto FC, sailed his corner kick to a streaking Tim Ream, who headed the ball to the Red Bulls captain who pound it in for a 2-0 lead.

The only response from Santos, whose roster includes top Brazilian forward Robinho, came in stoppage time from Germano, but this failed to put a damper on the evening for the Red Bulls.

Richards is one of the Red Bulls' most dangerous attacking players and is expected to feature prominently in their quest to become one of the leading franchises in the Major League Soccer (MLS).

The Montego Bay native was an MLS Rookie-of-the-Year finalist three years ago and enjoyed a strong sophomore campaign.

The speedy Jamaican winger notched a career-high three goals last season, despite missing time due to a variety of injuries.

The Red Bulls will open MLS play in their new home on March 27 against the Chicago Fire.