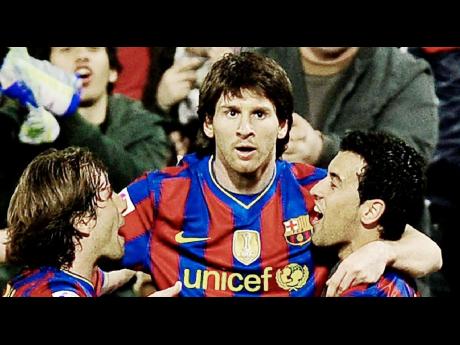 Lionel Messi's second hat-trick in eight days took his season tally to 34 goals yesterday, as Barcelona won 4-2 at Zaragoza to stay second in the Spanish league behind Real Madrid.

The Argentina forward, who also hit a hat-trick last weekend against Valencia, now has a league-leading 25 goals after tormenting Zaragoza's defence with a combination of close dribbling, strength and deadly finishing.

Messi headed home Pedro Rodriguez's cross in the fifth minute, but it was his 66th-minute strike that will be added to his lengthening list of great goals.

He stole possession near halfway, bursting past one player before his quick feet left defender Matteo Contini on the turf. Contini could only clutch at his opponent's shorts as Messi beat goalkeeper Roberto Jimenez with a low shot that brought a standing ovation from most fans at La Romareda stadium.

Messi followed that up with a curled shot in the 78th to beat Jimenez and claim his fifth career hat-trick.

Zaragoza's Adrian Colunga took advantage of defensive lapses to score twice in the closing moments. But Messi's dazzling skills led Contini to drag him down for a 90th-minute penalty that Zlatan Ibrahimovic converted for his first goal in March.

Madrid and Barcelona both have 68 points, but Madrid lead on goal difference.

Mallorca moved into the Spanish league's Champions League places with a 4-1 victory over Atletico Madrid, while David Silva paced third-place Valencia to a 2-0 win over Almeria.

Valencia have 50 points, Mallorca 46, Sevilla 44 and Athletic Bilbao and Deportivo La Coruna both have 42.