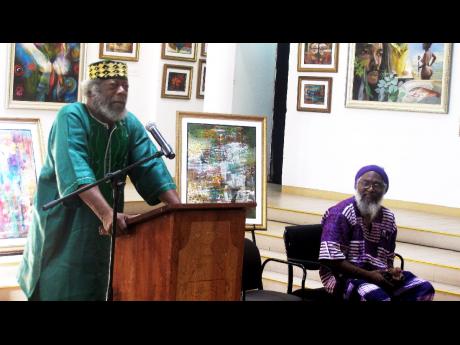 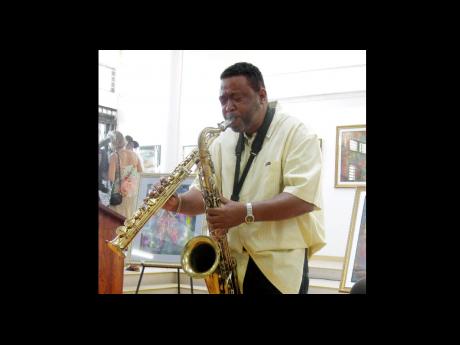 Dr Clinton Hutton's art exhibition, opened on Sunday at the Philip Sherlock Centre for the Creative Arts, UWI, Mona, is entitled 'Repossession', so it is natural that the launch would revolve around that theme.

However, guest speaker LeRoy Clarke (Chief Ifa Oje Won Yomi Abiodun) not only spoke to repossession before the substantial, appreciative audience, but also the tendency in the Caribbean to marginalise those creative artistes deemed too 'difficult' and not celebrate thinkers who have made important contributions. He placed Wilson Harris among those deemed difficult and said Professor Maureen Warner-Lewis was one of those not known enough.

Speaking in level, measured tones, Clarke said, "With the title there is a grand invitation, grand in the sense that it is so difficult to comprehend. This repossession, by whom? Of what? And that is the fact of our crisis? We do not have a 'we'." He spoke to various subjects, including himself ("when I cry I want you to know I'm crying"), the lignum vitae tree ("but they are neglected like how you are neglected"), obeah, cricket and beating pan as very different from playing pan, but always reentering the theme of repossession from an unexpected angle. "So the inner theme of the exhibition is talking about that neglect," Clarke said.

Speaking specifically to the paintings mounted in the round at the Philip Sherlock Centre, three placed on easels behind the lectern, Clarke spoke about "... the mixtures of colours, the sifting of atmospheres". However, he extended an invitation for the viewer to go to a secret place, close the door, try to shed all the clothing and understand what is being said. Without that, Clarke said, "all you see is colours".

"There is something enticing about the composition of the colours. It invites you to taste," Clarke said, before declaring the exhibition open.

Host of the launch, Professor Rupert Lewis, had earlier said "both Hutton and LeRoy Clarke challenge us to fresh thinking of ourselves, drawing on the rich ancestral knowledge". And Hutton, speaking after Clarke, spoke about a creative and intellectual ancestor who had been slated to speak at the launch of 'Repossession'. He attributed the titles and subject of two paintings in 'Repossession' to Professor Rex Nettleford and also honoured his former lecturer Sir Roy Augier, who was present at the launch.

Learning things about us

"This series is about the research I have been involved in over the last 15 years," Hutton said. That work involves Rastafarian elders, traditional Jamaican dance and masquerade traditions across the Caribbean. "What I am trying to do is learn things that are about us, what (Edward Kamau) Brathwaite calls the alter/native," Hutton said. "They exist. It is for us to invent the type of eyes that are necessary to see them."

"What I write and research I try to express in the painting," Hutton explained.

And at the start of his presentation, Clarke had said that he was a virtual stranger in Jamaica and also the rest of the Caribbean. However, Hutton pointed out , "Clarke's impact in the Caribbean is such that you now have what can be called a school. Many Caribbean artists are beginning to work in that tradition."

Douglas Ewart and Tony Greene each played before and after the launch, Greene going on to fuse his horn with Velia Espeut's voice as she sat beside Clarke and sang for him.