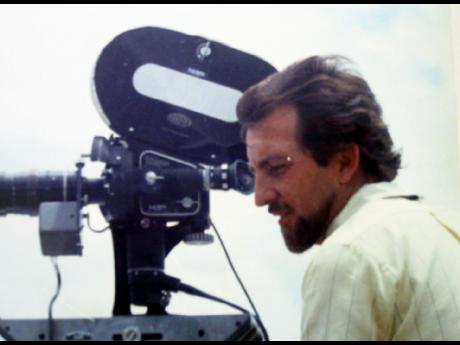 Perry Henzell on the set of 'The Harder They Come' in 1972. - Contributed photo

A full house reportedly turned out at the Egyptian Theater in Los Angeles last Friday, to pay tribute to Jamaican film-maker Perry Henzell.

The event was co-produced by American Cinematheque and Wild Indigo, a multimedia company based in Los Angeles. Arthur Gorson, a director at Wild Indigo, said the turnout reflected the respect the film industry has for Henzell who died from cancer in 2006.

"The reaction was better than expected. It was a joyous evening filled with the spirit of Jamaica and Perry Henzell," Gorson told The Gleaner. "Rarely have so many people turned out in one place to pay tribute to a Jamaican film-maker."

Henzell is internationally known as co-writer and director of the 1972 hit movie, The Harder They Come, which starred Jimmy Cliff and Carl Bradshaw.

The movie is largely credited with introducing Jamaican pop culture to an international audience. Gorson was a photographer with Rolling Stone magazine in 1972 when he came to Jamaica and did a feature story on the country's emerging music scene.

During his visit, Gorson and Henzell developed a friendship that lasted until the latter's death.

Henzell's wife, Sally, and their daughter, Justine, attended the event which followed a panel discussion on Henzell's contribution to Jamaican pop culture.

Jobson was moderator for the panel discussion which also included reggae historian Roger Steffens, Gorson and Justine. The tribute itinerary also included the showing of a new 30-millimetre version of The Harder They Come and the American premiere of No Place Like Home, Henzell's follow-up film.

American Cinematheque is a multi-faceted organisation dedicated to preserving American art. In the past, it has honoured Hollywood A-listers such as Al Pacino, Steven Spielberg and Martin Scorsese.