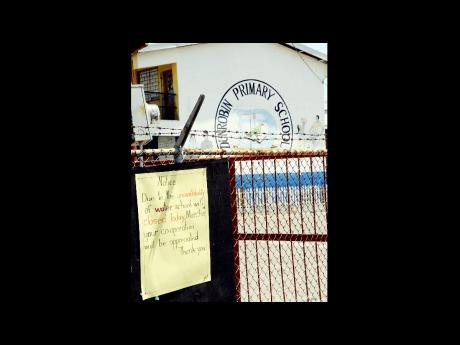 This sign, informing parents and students of the school's closure, was placed on the wall at Dunrobin Primary School in St Andrew yesterday. - Norman Grindley/Chief Photographer

Some 1,600 gallons of water vanished from two tanks at St Andrew Primary School over the weekend, although the Ministry of Education provides the school with round-the-clock watchmen.

The water was trucked to the school last Thursday, after principal, Beverley Haase, suspended classes for all students, except those preparing for the Grade Six Achievement Test (GSAT).

When contacted yesterday, Haase could not explain how the water was removed from the tanks, but said she was first alerted to it when the school's chef was about to start preparing meals for the students.

"When the cook turned on the pipes, no water," Haase lamented.

She said subsequent checks revealed that the tanks were empty.

"There was no need (for us) to use the water on Friday. So we left there with at least two full tanks," she added.

Haase said students were now being urged to take their own water to school.

Declining water levels at the Hermitage Dam and the Mona Reservoir has forced the National Water Commission (NWC) to institute water lock-offs throughout Kingston and St Andrew.

This has severely affected several Corporate Area schools, which have resorted to suspending classes.

The Ministry of Education's communications director, Colin Blair, said the Government was aware of the situation and urged principals not to wait until needs became "dire" before contacting the ministry.

He said the ministry was willing to work with schools that need help with tanks and other storage facilities.

"Due to the unavailability of water school will be closed today, March 22, your cooperation will be appreciated," said the sign that greeted students at the entrance.

However, principal, Robert Gillies, told The Gleaner that students preparing for the GSAT were not affected.

Half-Way Tree Primary was the other school that suspended classes last week.