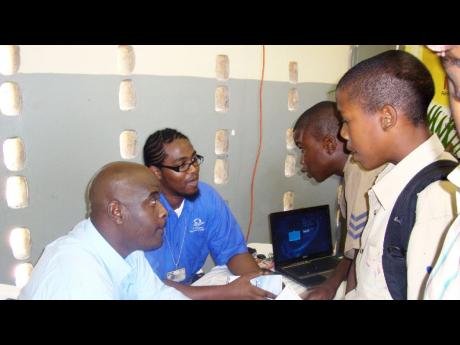 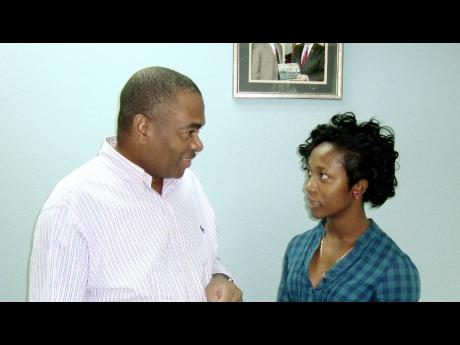 Shipping Association of Jamaica (SAJ) general manager Trevor Riley takes a moment out of his busy schedule to greet world and Olympic champion Shelly-Ann Fraser during her visit to the SAJ's Fourth Avenue offices last Friday. Riley, a long-time fan of track and field, congratulated Fraser on her successes and encouraged her to continue to make Jamaica proud. 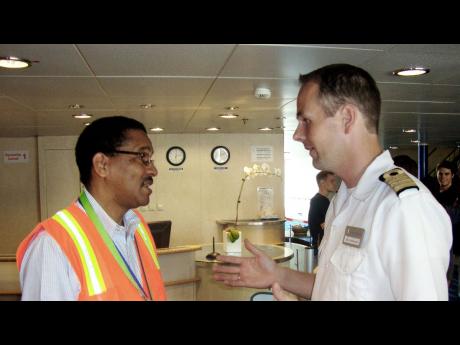 Grantley Stephenson (left), chairman and chief executive officer of Kingston Wharves Limited (KWL), can't help but smile at the warm welcome received from Dirk Colenbrander, captain of the Logos Hope book ship. Stephenson made a courtesy call on the captain and crew last Friday. KWL hosted the vessel between March 18 and 22 to assist more Jamaicans to get access to books available aboard the ship.
1
2
3

Grantley Stephenson, chairman and chief executive officer of KWL, said the terminal made the decision to host the Logos to afford more young Jamaicans the chance to select from the over 7,000 titles aboard the vessel.

"We understand that the majority of visitors to the vessel are children and we at KWL wanted to ensure that for as long as possible, the future generation took advantage of the wide array of literature at affordable prices," Stephenson said.

Project manager for the Logos' stop in Kingston, Zjumira Wout said up to Friday, over 111,400 visitors had been aboard the vessel since it docked in Kingston. This compared to just over 83,000 who visited the vessel while it was docked in Montego Bay for three weeks.

Tamara Francis, the only Jamaican aboard the vessel, said she has been with the logos for the last year and a half. "I have always had the heart for missions having volunteered with my church before. It has been a good experience, I have enjoyed the intercultural interaction," Francis said.

There are 51 nationalities among the just over 400 crew aboard the Logos Hope.

The vessel which docked in Jamaica on January 20, is on a tour of the Caribbean for a year. Kingston is the ship's 23rd stop on the tour. The next scheduled stop is the Bahamas.