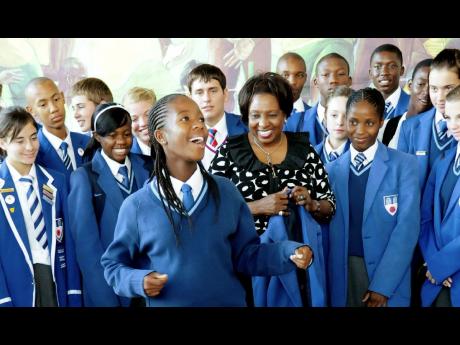 South African track athletes, following their arrival at the Norman Manley International Airport yesterday. The group is here to observe the GraceKennedy/ISSA Boys and Girls' Athletic Championships, which will start at the National Stadium tomorrow. - Ricardo Makyn/Staff Photographer 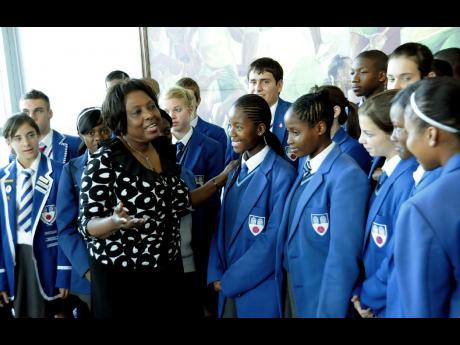 The Jamaican Government has established the Herb McKenley Scholarship Fund, with a view to awarding full scholarships to 100 student athletes over a four-year period to the G.C. Foster College of Physical Education and Sports for degree and certificate programmes.

Some 50 students will benefit this year, with approximately $9 million already made available through the Sports Development Foundation (S.D.F.), as the Government looks to use the initiative as a part of its drive to celebrate the centenary of the Inter-Secondary Schools Sports Association (ISSA)/GraceKennedy Boys and Girls' Championships, and also in recognition of the former athletic great after whom it has been named.

The Championships get under way at the National Stadium tomorrow.

Plans are in place to establish a selection committee, which will include representatives from various entities such as the Ministry of Education and ISSA, as well as other stakeholders, such as principals and other pro-youth organisations.

The scholarship will cover full tuition for each stipulated year of the programme.

Awardees will have to maintain a certain academic standard, which will be determined by the committee, and will have to participate in track and field activities over the life of the scholarship.

While unable to delve into details, Sports Minister Olivia Grange confirmed the initiative when contacted by The Gleaner late yesterday evening.

"We are looking to award 100 scholarships to students over a period of four years. It will include degree and certificate programmes and these scholarships are for the G.C. Foster College of Physical Education and Sports and will commence in the academic year 2010-2011," Grange confirmed.

"The first allocation is being done to mark the centenary of the Boys and Girls' Championships. In the first year, we will be awarding scholarships to 50 students and that is estimated to cost us $9 million, which will be funded by the Sports Development Foundation."

Grange hailed the programme as a mark of the Government's determination to use sports as a vehicle to drive the development of the nation's youth, and also highlighted its plans to bring the Spanish Town-based institution in line with other tertiary locales where sports development is concerned.

"The ministry is committed to its strategic objectives for sports, one of which is using sports as a tool for economic development and prosperity. We also hope to promote and build a sports industry that will increase its contribution to the national gross domestic product and the job pool," Grange reasoned.

"This is part of a programme of upgrading G.C. Foster because there are plans to really raise the level of the institution in terms of its physical facilities, and we really want to establish a centre of excellence there."

Grange added: "One of the first activities of the committee will be the reviewing and ratification of the terms of reference, following which it will, within a specified time, develop the criteria for the selection of scholarship winners and the procedures for selection and awarding of these scholarships."