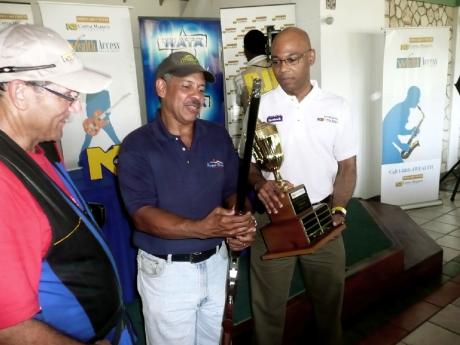 Ian Banks (center), winner of this year's National Commercial Bank (NCB) Capital Markets Sporting Clay Open, shows off the gun he used to win the tournament to Dennis Cohen, CEO of NCB Capital Markets, during Sunday's presentation ceremony. The competition was held at the Caymanas Golf and Country Club. - Photo by Robert Bailey

Banks shot 81 targets to win the competition, which was held at the Caymanas Golf and Country on Sunday.

"It was very difficult and as tough as any I have seen anywhere in the world," said Banks, who pointed out that heavy winds made it very difficult for the shooters.

"Once you see most of the scores out of a hundred goes below 80 and most of the shooters had scores below 80, that tells you how tough the course was," he said.

"To encourage new entrants to the sport, I think the course designers should set the course a bit easier because nobody likes to shoot low scores," Banks said.

"I've found over the years that no matter how difficult the course is, there is going to be the winner and this really affects the newcomers," added Banks, who has been competing in the sport for the past 18 years.

Richard Yap shot 77 targets to capture the 'A' Class section ahead of Shaun Barnes, 76, and Richard Azan, 73. Chris Kean won the 'B' Class with 75 targets ahead of Richard Ramson, 70, and Eddie DePass, 68.