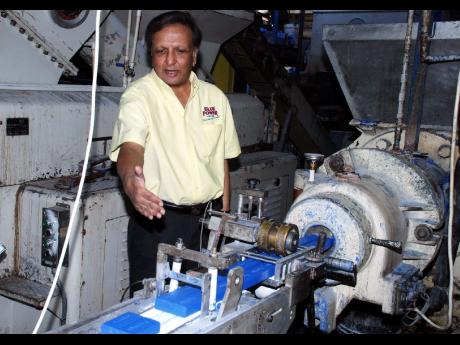 Dhiru Tanna, managing director of Blue Power Limited, explains how the soap is made during a tour of his factory on Victoria Avenue in Kingston on March 8. - File

Blue Power Group Limited, a soap manufacturer and building-materials retailer, has opened subscription on its 22.599-million share offer at $3.89 per share in an initial public offering that precedes a planned listing on the junior stock market.

The offer, if fully subscribed, would raise $87.9 million.

Only 5.73 million of the shares are available for purchase.

The other 16,867,770 is reserved for staff, directors and current shareholders to whom the company is indebted for $68.17 million at October 2009, and as compensation to Mayberry Investments Limited.

In exchange for $59.9 million of the debt, directors/shareholders will take up 15.4 million shares, at the same price as the IPO, and convert another $1 million of the debt into 257,100 shares as a gift to staff, whereas non-executive director and 'mentor' Jeffrey Hall will acquire 257,070 units.

Mayberry gets 948,300 shares, valued at $3.69 million, in lieu of professional fees for its role as lead broker of the IPO.

Blue Power's listing is expected to take effect within three to four weeks of the IPO's close date, following the lead of Access Financial Services, which was the first to list on the JSE Junior Exchange in October 2009 after raising $100 million from a $18.34 per share offer.

The capital raised from the Blue Power IPO is earmarked for building out the company's soap manufacturing business.

Blue Power is part of a group of companies run by Dhiru Tanna that includes Lumber Depot Limited in Papine, St Andrew, which retails other construction material.

Total assets of the company at the end of April have been put at more than $158 million, with the valuation of the Papine property being carried in the books at a historical cost of $55 million.

Blue Power has a 45-strong work force with 25 employees at the lumber depot, 15 full-time workers assigned to the manufacturing division and the remainder being casual workers.

"The directors believe that the company's target market for the Blue Power Division in particular, namely Jamaica as well as the Caribbean diaspora in the United States and the United Kingdom, holds significant potential for growth," according to the prospectus detailing the share offer.

The document underscored the company's emphasis on its manufacturing activity.

"As such, the company intendsto use the greater part of the proceeds of the funds raised as a result of the invitation to fund the expansion of its current business model for that division," it stated.

An amount not exceeding $7.5 million, according to the prospectus, will be used to cover expenses associated with the IPO.

Antibes Holding Limited, currently the major shareholder of Blue Power Group with 47.88 per cent of the shares, will be increasing its stake in the company to 50.09 per cent following the IPO.

Other shareholders, such as Kennedy Benjamin with 7.43 per cent, andMark Hart and Jane Fray, both 7.35 per cent owners, will see their shares diluted.

Blue Power is contracted to a number of other companies to manufacture their soap brands for the domestic market, including GraceKennedy, Lasco Distributors, HD Hopwood; and Cari-Med.