Miller to refocus on Sagicor Financial 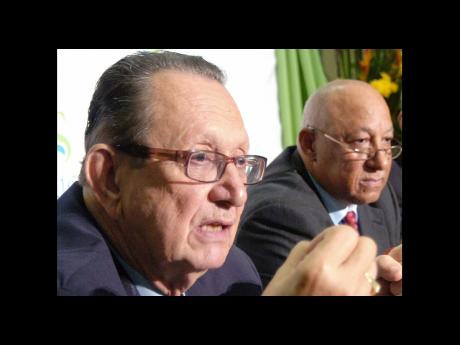 R. Danny Williams (left) and Dodrige Miller have switched positions on the Sagicor Jamaica board. - File

R Danny Williams has taken over the top seat at Sagicor Life Jamaica (SLJ) Limited as chairman of the board of the company he founded four decades ago.

Williams' promotion to chairman took effect in February, a position that opened up when Dodridge Miller opted to step down on January 31, according to a new market disclosure by Sagicor.

Miller, who is chief executive officer of Sagicor Financial Corporation - Barbadian parent company for the Jamaican operation - retains his seat on the SLJ board.

Miller said he was taking a less active role to focus on Sagicor Financial. The Barbadian company has found itself in a defensive posture in the past few months against market speculation about its financial health.

Much of the talk was spurred by two deals that pumped fresh cash into the company - a private sale 11.7 million shares to the National Insurance Board of Barbados for BDS$39.12 million or $3.325 per share, and the sale of its 33 per cent holdings in Jamaican subsidiary Pan Caribbean to Sagicor Jamaica, raising the latter's stake in the investment company to 85 per cent.

"Sagicor Financial Corporation, the parent of SLJ, will require greater focus in the upcoming years as we pursue strategies that will allow us to achieve our growth targets," said Miller in a company-issued statement.

"I remain fully committed to Sagicor Life Jamaica and will continue to contribute to this important member of our group as a director."

Sagicor Financial in its last earnings report recorded a drop in nine-month profit from US$74 million to US$60 million at September 2009.

The company said then that the economic recession was weighing heavily on its investment holdings, and that business was likely to remain depressed into this year.

Sagicor Jamaica began operation as Life of Jamaica Limited until its rebranding in 2007.

Williams has served twice as president of Life of Jamaica. He served as a government minister in the intervening period.

The company fell into financial difficulties in the 1990s, was rescued by Government, and eventually sold to the Barbados firm.