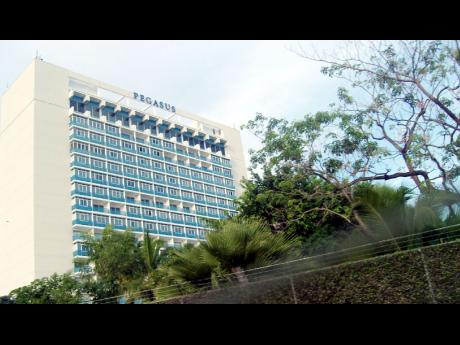 Scotia DBG Investments has culled four proposals from the dozen received, and will decide in five days, by next Monday, which of them will be invited to bid for majority share of the 310-room Jamaica Pegasus hotel.

The sale is now expected to extend into mid-summer.

The confirmation of the number of proposals that passed the first hurdle was not disclosed by Mitchell, but by Wayne Chen, chairman of state agency Urban Development Corporation, but neither would say the origins of the interest in the hotel, which holds the largest share of the meetings market.

The UDC through its subsidiary, National Hotels and Properties Limited, owns 59.81 per cent, or 71.87 million of the more than 120.165 million issued shares in the hotel.

The unsealing of the expressions of interest was "very transparent, with persons from the Office of the Contractor General, Development Bank of Jamaica and Scotia DBG," said Chen.

Pegasus is managed by a company called Pegasus Hotels of Jamaica, which trades on the Jamaica Stock Exchange.

The stock is currently trading at $16, pricing the company at $1.9 billion, and valuing UDC's stake at around $1.13 billion.

UDC contracted Development Bank of Jamaica (DBJ), another state agency, to handle the sale, which in turn brought in Scotia DBG as adviser.

"The Divestment Team is reviewing the pre-qualification submissions made in an effort to select pre-qualified bidders on or before March 29," said DBJ in written responses to Wednesday Business.

"Once qualified, they have until Monday, July 5, to submit their bids."

That timetable, according to the DBJ, takes the team to around August to close a deal that was originally scheduled to be finalised last year.