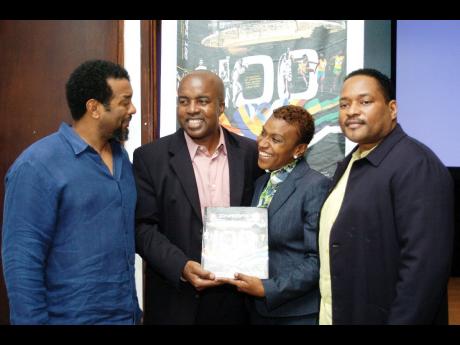 Author Hubert Lawrence (second left) and Colleen Montague (second right),of the Inter-Secondary Schools Sports Association (ISSA), hold a copy of the book - 'Champs 100: A Century of Jamaican High School Athletics 1910-2010' - at the PCJ Auditorium in New Kingston. The official launch of the book took place at the PCJ Auditorium, Trafalgar Road, on Monday night. The duo is flanked by Colin Channer (left), who compiled the foreword and editor Michael Grant. - Winston Sill/Freelance Photographer

A large gathering was on hand Monday night to witness the official book launch of Champs 100: A Century of Jamaican High School Athletics 1910-2010, at the PCJ Auditorium in New Kingston.

The book, which captures the memories of the Inter-Secondary Schools Sports (ISSA)/Boys and Girls' Athletics Championships over the period, is one of several events which is being used to mark the centenary celebrations of Champs, which is presently underway at the National Stadium.

"I was impressed with the turnout and is hopeful that this is a sign of good things to come," said ISSA president Dr Walton Small, who along with several dignitaries, government officials and track and field officionados, were on hand to witness the launch, which was organised by the book's publishers, Great House OmniMedia Limited.

"We are confident that the investment was sound and are looking forward to good sales so that we can invest in a second edition if the need arises," he added.

Written by noted track and field analyst, Hubert Lawrence, edited by Jamaican-born best-selling author, Michael A. Grant, and with a foreword by internationally acclaimed Jamaican writer, Colin Channer, who participated at Champs, the book is a compilation of the history and legacy of Champs.

"A lot of effort was put in this book and I would like to truly thank those who contributed. It's a book that is representative of what took place from the formative years to present and the hope is that it will rekindle memories and inspire future performances," said Lawrence.

The book features a chapter for every year of competition, comprehensive championship statistics and a detailed discussion on the merger of Boys and Girls' Champs into one meet in 1999. It also chronicles the origins of the rivalries that have preserved the high standard of competition for a century.

Heavily illustrated, the book, which is hard covered, glossy and full coloured, does much to explain the persistence of Jamaican track and field athletes - particularly sprinters - at the top level of world athletics.

The manuscript contains over 1,000 photographs, as well as features that take an in-depth view of many of the Champs' stars who have delighted fans for a century.

The book, which was officially launched by Colleen Montague, principal of Wolmer's Girls and chairman of the Champs 100 organising committee, following an entertaining reading of the foreword by Channer, is available in book stores across the country and online at a cost of $4,500.