Champs soldier on through drought 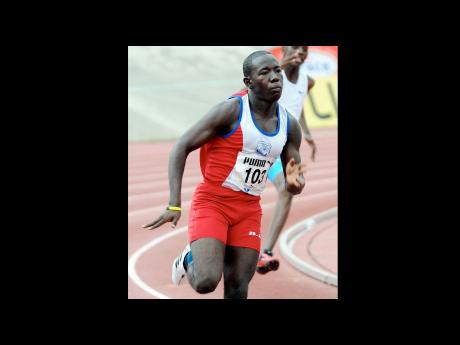 Bridgeport's sprinting sensation Jazeel Murphy powers his way to victory in heat five of the Class Two boys 200m at the National Stadium yesterday, during the ISSA/GraceKennedy Boys and Girls' Championships. Murphy posted a time of 22.54 seconds. - Ian Allen/Photographer

Athletes have already made the 100th staging of the Inter-Secondary School Sports Association (ISSA)/GraceKennedy Boys and Girls' Championships a memorable one, despite tough circumstances.

On yesterday's first day, athletes and spectators alike walked through the gates of the National Stadium only to find out there was no water on the premises.

Dry taps were a feature throughout the day as disgruntled patrons laboured throughout without the precious commodity, while organisers tried to ease the discomfort by placing 650-gallon drums at certain points around the venue.

Major Desmond Brown, chairman of Independence Park Limited, the state-run agency that has been charged with the day-to-day operations of the venue, acknowledged the problem, but argued that there was little that they could do to make things more comfortable.

Brown advised that his organisation had already contacted the National Water Commission (NWC) about the issue, and that they were advised that there could be no guarantees regarding the availability of water supply to the venue until Friday and Saturday, when the meet is expected to attract larger crowds to the National Stadium.

"We have been having water problems every day for a while, and we have been in constant contact with the National Water Commission about the issue for some time before this event," Brown shared when contacted by The Gleaner yesterday afternoon.

When contacted, ISSA president Walton Small, who was not at the venue at the time, was unaware of the problem, but informed that the NWC had also been contacted by his organisation through a letter some time ago, with a request not to discontinue service at the National Stadium throughout the staging of the event due to its magnitude.

In the meantime, Charles Buchanan, corporate communications manager of the NWC, pointed out that the problem is connected to the general water shortage that is affecting areas served by the Mona catchment facility.

He called the situation unfortunate.

Despite that, St Hughes' Candecia Bernard, in the first final of the Championships, made no mistake, breaking the Class One record in the discus to give her school its first gold medal of the meet. The new mark is 46.76, smashing the 45.13 Champs record.

That was preceded by very fast first-round heats in the Boys Class One 200 metres, with Wolmer's Julian Forte clocking 21.08 to stake his claim for the title in an event that promises to be a humdinger.