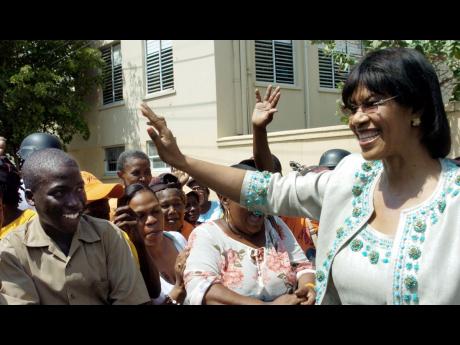 TWO CRITICAL pieces of legislation, arguably the most far-reaching of the measures presented for passage during the just-concluded parliamentary year, fell off the Order Paper on March 22, the day Parliament prorogued giving way to a new legislative year, which begins today.

The Corruption Prevention (Special Prosecutor) Act and constitutional amendments wrapped in a package called the Charter of Fundamental Rights and Freedoms missed another parliamentary deadline for passage.

"It is a matter of regret that this parliamentary year is coming to an end and we haven't taken the Charter of Rights legislation," said Ronald Thwaites, member of parliament for Central Kingston.

"It doesn't reflect well on the Parliament that we have postponed and apparently downgraded the pre-eminence of that piece of legislation, not comprehensive, but enhancing the rights of the people making them justiciable, which we should have brought into being as a matter of priority," he contended last week during the final sitting of the House for the 2009-2010 parliamentary year.

The Charter of Rights has been on the parliamentary agenda for more than 16 years, but its passage remains elusive.

It should replace Chapter III of the Constitution, providing for greater protection of the fundamental rights and freedoms of Jamaicans.

Prime Minister Bruce Golding expressed disappointment that the House was not able to complete passage of the measure.

Debate on the bill was concluded on November 17 in the House. However, the bill had to remain on the table of Parliament for three months because it is a con-stitutional measure that would replace an entrenched provision in the Constitution.

The three-month period expired in February and third reading of the bill should have been taken.

However, at the end of that time the bill stalled.

"Part of the reason for that had to do with the deliberations that had taken place between both sides as to how to treat with the question of capital punishment," Golding said.

The parliamentary opposition had insisted that passage of the Charter of Rights should be contingent on an amendment to the Constitution removing the five-year stricture in relation to the carrying out of the death penalty after conviction.

This would effectively nullify the landmark Pratt and Morgan ruling by the United Kingdom-based Privy Council.

The Corruption Prevention (Special Prosecutor) Act, a major legislative plank of the Jamaica Labour Party (JLP) manifesto, was referred to a joint select committee from July 2008. However, the committee failed to complete its deliberations and to submit a report to the House.

With crime remaining the country's number one problem, Parliament slumped into silence on the six crime bills which were introduced in December 2008. The measures fell off the Order Paper and will have to be reintroduced this parliamentary year.

The Independent Commission of Investigations Act, 2010