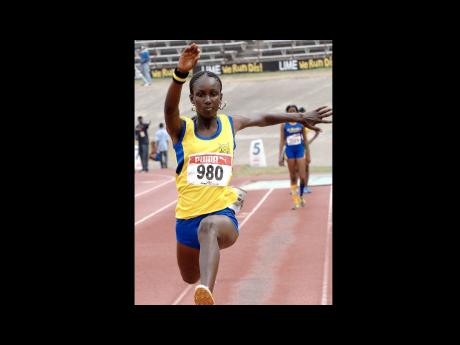 Rochelle Farquharson of St Elizabeth Technical High School competes in the girls' triple-jump open, on the first day of the Inter-Secondary Schools Sports Association/GraceKennedy Boys and Girls' Championships, at the National Stadium yesterday. Farquharson won the gold medal with a leap of 13.20 metres. - Ian Allen/Photographer

Vere Technical's girls are the early pacesetters at the Inter-Secondary Schools Sports Association (ISSA)/GraceKennedy Boys and Girls' Championships after the completion of two finals, as the meet got under way at the National Stadium yesterday.

Edwin Allen are next on eight, followed by St Jago (five), St Andrew (four) and Manchester High (one).

St Hugh's Candicea Bernard was the star of day one, carving her name in the record books after setting a new mark in the Class One girls discus. Bernard posted a distance of 46.76 metres to remove Salcia Slack's previous record of 45.13, which was established in 2008.

Bernard, achieved the feat during the preliminary round, while Vanessa Levy (Vere Technical), 45.85m, also managed to beat the old mark for her silver medal placing. Third went to Kenisha Stewart of Edwin Allen with a throw of 37.97m.

In the other final contested yesterday in the girls' section, STETHS' Rochelle Farquharson obliged to capture the triple jump open with a leap of 13.20m, after coming into the Championships as the only female to go over the 13-metre mark.

Farquharson posted the mark with her first jump, while the Wolmers' pair of Samantha Francis, 12.68m, and Jeanelle Facey, 12.50m, claimed the silver and bronze medals, respectively.

Title contenders Edwin Allen suffered a major mishap when their favoured 4x100m Class Three team was disqualified for an illegal changeover, this after crossing the finish line way ahead of the field.

However, they still had a positive opening day and showed their intentions in the girls open 400m hurdles event with sisters Nikita Tracey, 58.67, and Ristananna Tracey, 59.87, winning their respective heats with ease and looking set to claim two of the medal spots on offer in tomorrow's final.

The Frankfield-based school was at it again in the Class Three girls 800m as Marleena Eubanks, 2:15.93, and Sanikee Gardner, 2:18.69, finished as the fastest qualifiers for the today's semi-final round.

Holmwood's Chris-Ann Gordon, who won her heat in 2:22.79, is tipped by many to win this event and will be happy with her performance, looking very comfortable while clocking 2:22.72 in her heat, to finish ahead of Manchester's Shanise Gordon, who posted 2:23.36.

In Class Two, pre-meet favourite Demara Bryant, the only athlete below the two-minute mark this season, did not face the starter, leaving Bog Walk's Willomena Williams to post the fastest time going into today's semis, with a run of 2:14.87. The quartet of Jhevere Hall (St Jago), 2:16.10, Desreen Montaque (Edwin Allen), 2:16.86, Shevel McDonald (St Jago), 2:17.15, who recently represented Jamaica at the NACAC cross country championship in Trinidad, and Taska Johnson (Vere Technical), 2:17.36, who are expected to lock horns in the final, all qualifying with ease from their respective heats.

Krista-Gay Taylor of Wolmers' leads the 15 qualifiers for the finals of the Class Three high jump, which will take place this morning at 10:45. Taylor, who has already achieved a mark of 1.70m this season will be tested by Covenant of Mercy Academy's Tatiana Wolfe, Vere's Chennel Palmer and Immaculate's Safia Morgan, who have all posted a height of 1.65m this year.

Edwin Allen will be looking to Onessa Patten and Danique Bryan, while Holmwood will hope to pick up crucial points from Shanice McPherson and Latavia Coombs, as the title charge starts in earnest.

The girls Class Two 200m looks set to be an exciting affair with last year's Class Three champion Shericka Jackson booking her spot in the next round with a powerful 24.76 clocking. She will, however, have to dig really deep if she is to get the better of the likes of Glengoffe's Natasha Morrison, 24.28, and Shawnette Lewin (Edwin Allen), 24.59.

St Jago's Natalliah Whyte, who is favoured to win gold in Saturday's final, looked in good shape as she easily won her heat en route to posting the fastest time, 25.34, in qualifying for the Class Four girls 200m. Whyte got the better of The Queens School's Kristal Robertson, 26.22, and Hydel's Samara Spencer, 26.30, with the latter also qualifying for today's semi-finals as one of the fastest losers.