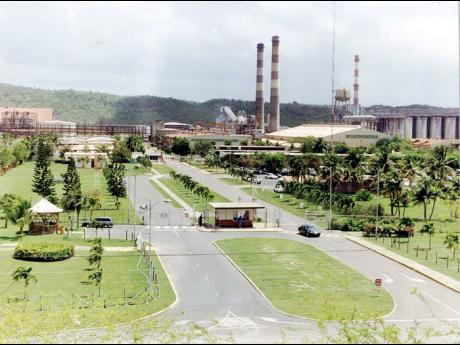 A view of Jamalco plant in Clarendon.

Hong Fan Trading, a Chinese company that specialises in the production and sale of metallic elements that help to strengthen alloys, has made an offer for the government's 45 per cent share of Jamalco alumina refinery, administration sources say.

The mining and energy minister could not be immediately reached for comment, but Financial Gleaner sources say that Hong Fan is working on the deal with Ray Chang, a Jamaican-Canadian businessman, who in recent years has been scouting for opportunities here.

According to these sources, Prime Minister Bruce Golding had talks with principals of the Guangzhou-based Hong Fan during his recent official visit to China, which was followed by the signing of the memorandum of understanding (MOU) between the parties.

"Any agreement between the government and the Chinese has to have the blessing of Alcoa Minerals, Jamaica's partner in Jamalco," explained a government source, who said that Golding intends to speak about the possible deal during the budget debate.

The PM had announced, while on thatvisit to drum up investments for Jamaica, that he had secured business worth US$500 million (J$45 billion) from the Chinese.

"Under the Jamalco agreement, Alcoa has the right to match any offer made by a third party for the government's stake in the company," said the source, who asked for anonymity because he was not authorised to speak on the matter.

"We are are very excited about the possibilities of this deal, for it could mean an injection of capital in Jamalco without the government having to come up with cash which it neither has nor wishes to go to the market to raise," our source added.

Situated in Hayes, Clarendon, the 1.4 million-tonne Jamalco refinery remains in production in Jamaica, where the industry largely collapsed in the face of the global recession and the nosediving of demand for metals.

With the Chinese economy rebounding and its hunger for commodities likely to return, officials here believe that a stake by Hong Fan in Jamalco would make sense.

"The view is that there would be a market for the product, upon which you could advance the case for the expansion of the plant," said the government source.

Once equal partners, Jamalco is now owned 45 per cent by Jamaica's Clarendon Alumina Productions and 55 per cent by Alcoa.

The American firm, though always the operating partner, gained the additional 5.0 per cent equity in exchange for its financing of a 125,000-tonne Early Works Expansion project that was meant to be the precursor to a larger upgrading of the refinery.

In the middle of the decade, Alcoa and the government agreed on a US$1-billion project to double Jamalco's capacity, but that arrangement foundered on their inability to secure the supply of LNG as a power source for the plant. The conventional oil-driven power plants would be too expensive, therefore weakening the attractiveness of the investment.

Trinidad and Tobago, which had reneged on a plan to supply the LNG has since said that it would make Jamaica a priority once new supply trains come on stream.

The Trinidadians now perceive a strategic gain in supplying cheaper energy to a Jamaica alumina plant: it could provide throughput for an alumina smelter planned for Trinidad and Tobago.

But notwithstanding the recent overtures from Port-of-Spain, the Jamaican government has also been looking for other supply sources globally.

Indeed, Ray Chang has in the past attempted to put together an LNG and compress natural gas (CNG) supply consortium for Jamaica.

"Ray might wish to revive those initiatives, if it is not already happening," an energy-sector source suggested.