IDB to Jamaica...Choose the right priorities 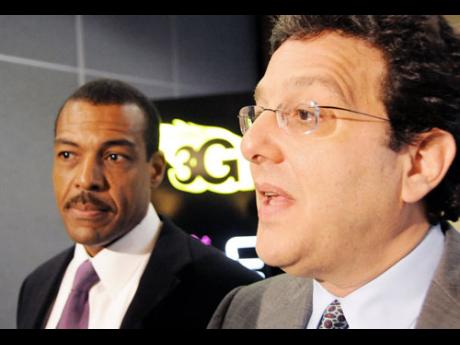 Gerard Johnson (left), the Inter-American Development Bank's country representative to Jamaica, and Joseph Matalon, president of the Private Sector Organisation of Jamaica (PSOJ), are seen here at the breakfast forum of the PSOJ Chairman's Club at The Jamaica Pegasus hotel in New Kingston on Tuesday.- Rudolph Brown/Photographer

Having made a US$600-million bet on Jamaica, the Inter-American Development Bank (IDB) is signalling that it expects the Bruce Golding administration to make tough political choices on which economic projects and programmes to prioritise, a message delivered in Kingston this week that also appeared to be pushing for a remake of tax policy.

Jamaica has to decide how best to allocate resources in a way that drives economic activity while ensuring that debt and deficit targets are met.

"Twenty years from now, the shock waves about the decision that you make now will be something to talk about and analyse," said IDB country representative to Jamaica, Gerard Johnson, "a defining moment given the kind of micro decisions that have to be made about relinquishing ways that make no sense ... like paying absurd taxes."

IDB's US$600-million loan package to Jamaica is the largest, measured relative to gross domestic product, it has approved for any of the bank's 48 members.

So far, three policy-based loan agreements have been signed to deploy US$170 million (J$15.2 billion) of the larger package to be distributed over fiscal 2010-11 for budgetary support and part funding of a financial sector rescue fund.

"Success of first year of the program is critical. Wait-and-see could undermine the programme, so it is 100 per cent front-loaded," said Johnson, referring to the International Monetary Fund rescue programme for Jamaica that triggered IDB and other multilateral assistance.

"Once the policy measures are taken, for example, the fiscal responsibility legislation is enacted, and once you meet the policy target, then the next tranche of funds will be disbursed," said Johnson.

"We are trusting the Jamaican budget system and its allocation of priorities."

But Johnson has also signalled what those priority "micro decisions" should include: a revision of tax and duty waivers, a less "absurd" property tax regime; as well as a rethink of some subsidies, ad hoc allocation of scarce revenue, cost recovery, for example, with water and irrigation, and a road-construction programme to incorporate a strong maintenance component.

"How do you make those micro decisions, such as a series of subsidies, people paying property tax of $100 per year for a US$2 million house," he said. "Do these make sense? Does it make sense that nobody pays taxes?"