FINSAC's handling of the crisis 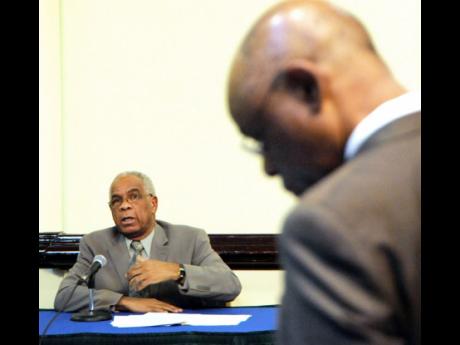 Excerpts of Chapter three of former chairman of the Eagle Group of Companies, Dr Paul Chen-Young's, written testimony to the FINSAC enquiry.

It has to be assumed that the term 'borrowers' refers to all banks and life insurance companies that borrowed heavily from the Bank of Jamaica and Government, as well as companies and individuals that were retail borrowers.

All of these borrowers were subjected to the operations of FINSAC, which was established in 1996, and, as its name suggested, was an entity that should have provided the support and leadership to allow for the orderly adjustment in the troubled domestic financial sector.

FINSAC began its task by recruiting a team of investment bankers and forensic auditors.

All of the troubled financial entities met individually with the investment bankers to discuss the type of financial assistance needed to restore viability.

But the team disappeared from the scene after a short say and the emphasis was then placed on the work of forensic auditors.

This shift, with heavy dependence on forensic audits - and less of an investment banking approach to the problem - turned FINSAC away from the mandate and terms of reference.

Instead of seeking to restructure the finances of the troubled financial entities and to allow enough time for them to be rehabilitated either individually or on the basis of mergers and consolidation, the thrust was towards finding causes to prosecute the principals of these institutions.

Over time, FINSAC took over the control and ownership, in some cases, of all of the troubled financial institutions and some 158 companies.

Eventually, it sold off the entire troubled life insurance and domestic banking institutions to overseas interests.

Within a matter of months, the Jamaicanisation programme of the financial sector was wiped out.

The entrepreneurs of successfully run financial institutions until the crisis of the 1990s lost their businesses and were summarily discarded.

In some cases, a select number faced legal prosecution.

Bank debts were sold to the Beal Bank of Texas, and thousands of entrepreneurs and other individuals suddenly discovered that they had lost their banking relationship.

FINSAC failed in its primary task of working with the domestic financial sector to restore viability as required in its terms of reference. Instead, it acted more like a business broker that simply engaged in the fire sale of some of the most valuable national assets to overseas interests.

In doing so, it destroyed entrepreneurship and created hardship for thousands of Jamaicans.

Today, almost the entire banking and life insurance industries are totally owned and controlled by Canadian and Caribbean companies. It would be difficult to find any other country where a dynamic domestic financial sector was obliterated as that in Jamaica.

Not only did FINSAC abrogate its responsibilities by selling off financial institutions, the terms of sale must be considered as being detrimental to Jamaican taxpayers and should never have been done on those bases.

There are two very serious criticisms - from a purely technical point of view - that can be levied (sic) against the sale of these institutions.

First, in every single case, FINSAC took all the risks in absorbing bad loans and investments but there was no upside gain from participating in any future profits from the entities sold with clean balance sheets.

As we have seen from the current international financial crisis, one of the fundamental elements in the bailouts in various countries is that taxpayers must have a chance to participate in any recovery.

This fundamental position is best summarised in the editorial of the conservative Financial Times (October 8, 2008), which stated: "Infusions of capital must be accompanied by preferential shares and warrants in banks to make sure that taxpayers get their money back and benefits from any upside as a result of capitalisation."

The intervention in 2009 by the government of Trinidad and Tobago to deal with the failure of the CLICO conglomerate shows active and direct government support to help restructure while allowing for participation in future potential gains to protect taxpayers.

It did not embark on any hurried sale of CLICO entities.

In Jamaica's case, the sale of its financial institutions left taxpayers with a massive national debt as they received what must be described as nominal payments based on current book values for companies with clean balance sheets.

The sale of National Commercial Bank and the Union Bank - a combination of Eagle Commercial Bank, Jamaica Citizens Bank and Workers Bank - was with a down payment and loans for balance of the purchase price at the nominal rate of 6.0 per cent, substantially less than the rate at which Government borrowed money.

There was no conversion feature to allow for any upside gain in future profits and I suspect that these loans were easily repaid from profits.

The life insurance companies were sold with clean balance sheets.

As in the case of the sale of the domestic banks, the taxpayers also took the risk but had zero participation in any potential upside in earnings, which have been massive and which would have helped to reduce the debt burden created by the Government for its intervention in the sector.

Second, the sale of these financial institutions will prove extremely costly, not only financially, but from an economic point of view.

Profits earned will have a significant annual drain on the balance of payments that will be a drag on economic growth, which in turn will put pressure on Jamaica's foreign exchange rate. Entrepreneur-ship has been destroyed, numerous businesses have closed and workers laid off.

The balance of payment effect is now even more serious as the trade gap continues to widen, especially with the closure of bauxite/alumina companies and the fall in remittances as a result of the international financial crisis.

The sell-off of the domestic financial institutions can be justly described as a grave strategic mistake that will be great burden for many generations.

In addition to the sale of financial institutions, the disposal of loans to Beal Bank of Texas has proven to be extremely costly to taxpayers and to the country.

Loans amounting to US$393 million were sold for US$23 million, with some participation from collections.

Prime Minister Bruce Golding announced in Parliament that a total of US$122 million had been recovered, of which US$30 million was paid to the Government, giving a net gain to the debt collectors of US$92 million.

Instead of a fire sale of these bank debts (which will adversely affect the balance of payments and economic growth), a less costly and more sensible approach would have been to enter into agreements with the banks to collect debts on a fee basis and to maintain the banker-client relationship.

These bank loans could have been restructured to ease repayment burdens and give many borrowers time and the opportunity to recover.

Most of the domestic financial and business entities could have been saved had FINSAC followed its mandate to develop recovery plans with entities and to allow the five-year window in its terms of reference.

Once FINSAC took over bad debts and investments with corresponding holdings of high-cost deposit and commercial-funding liabilities, the bank and life companies could have recovered and achieve viability.

FINSAC could have taken preference shares and made loans with convertible rights to participate in future profits.

It could have insisted that workout plans be put in place by restructured financial institutions to assist businesses with viable prospects. This would have saved the domestic financial sector.

FINSAC not only failed to rehabilitate troubled financial institutions, its treatment of various entities can be described as arbitrary and, arguably, even discriminatory. For example, all investors in National Commercial Bank, Life of Jamaica, and, I believe, Island Life, lost nothing and were either paid for their shareholding or allowed tokeep their shares and enjoy the capital appreciation from future profitability of these institutions.

They received bailouts like depositors and holders of commercial paper.

This was not the treatment meted out to investors in other entities like Island Victoria Bank, Workers Bank, Century National Bank and the Eagle Financial group.

No criteria were publicly stated in explaining these disparate treatments.

In certain cases, direct assistance from FINSAC/Government saved financial entities and their shareholders. For example, Manufacturers Merchant Bank was saved as the Government reclaimed investments in the sugar industry, which it had previously sold to the bank.

In Dyoll's case, low-cost financing was provided to save its St Ann resort project, Drax Hall.

Not only were a select group of investors discriminated against by taking away their companies, but in certain cases, notably Don Crawford and myself, aggressive legal prosecution was meted out.

With extensive forensic audits done on all of the troubled financial entities, were there no other cases that justified similar legal action against their principals?

In summary, the manner in which the financial crisis was handled by FINSAC has not only serious national financial and economic consequences, but also on the perception of justice.