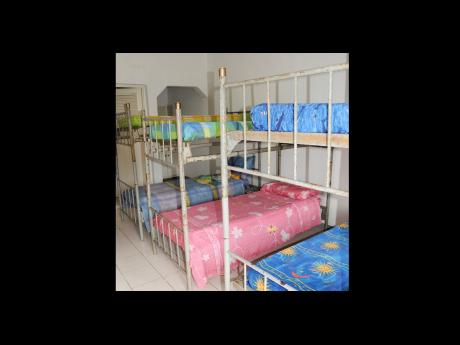 Armadale girls who have had a rough year settle into their home at the former hotel Diamond Crest Villa, near Alligator Pond, Manchester. The inmates are housed six girls to a room in a dormitory setting, each room also has its own bathroom. - Ian Allen/Staff Photographer

GOVERNMENT HAS backed up its talk about an intention to build and refurbish suitable remand and correctional facilities for juveniles by allocating $174 million to the refurbishing of the Montpelier facility in St James.

This comes after seven girls perished in a fire at an overcrowded Armadale facility in St Ann last year.

A subsequent commission of enquiry into the events of Armadale found "negligence on the part of the State and dereliction of duty, administrative errors, unlawful conduct and indifferent and insensitive actions on the part of some public officials who were responsible for the operation of the centre or who were involved in the events preceding, during and after the fire in which seven girls aged between 15 and 17 perished".

The Government was then taken to task by interest groups as well as the United Nations special rapporteur on torture who lashed it for the unacceptable conditions in which it houses children in need of care.

An examination of the 2010-11 Estimates of Expenditure tabled in the House of Representatives yesterday indicated that although the Government's capital spending on national security was cut from $534 million to $491 million, the State plans to spend $321 million on the construction and renovation of these facilities.

No money was spent in these areas last year.

Meanwhile, it is not just Montpelier that is set to benefit from government spending. One hundred million has been budgeted for Cape Clear in St Mary and Diamond Crest in Manchester has been allocated $47 million.

In a statement to Parliament earlier this month, Prime Minister Bruce Golding indicated that Cape Clear, a former youth camp, will be converted into a juvenile remand centre to house boys who are to be taken before the court or who are awaiting a decision of the court.

He also said that the boys being housed at the St Andrew Remand Centre in Stony Hill will be transferred to Cape Clear and the Stony Hill facility will then be designated a juvenile remand centre for girls.

In that statement to Parliament, Golding noted that there were three juvenile correctional centres and one juvenile remand centre with a total capacity of 311.

He said, however, that these facilities, up to February, accommodated 325 children, 286 of whom were the subject of correctional orders issued by the courts and 39 who were being held on remand.

He also said that an additional 124 children were being housed at other facilities.

In the throne speech delivered earlier yesterday at the start at the ceremonial opening of Parliament, Governor General Sir Patrick Allen said new juvenile remand and correctional centres would be established this year so that the practice of children being held in police lock-ups cease.

The governor general said the focus on these areas would mean that "those ordered to correctional facilities will be properly accommodated and exposed to appropriate programmes to address their behavioural challenges and development needs".

Earlier this week, Peter Bunting, the opposition spokesman on national security, told The Gleaner that he hoped sufficient allocation would be put aside in the Budget "to ensure that what happened at Armadale never happens again".

No allocation has been made for the construction or improvement of adult correctional facilities.