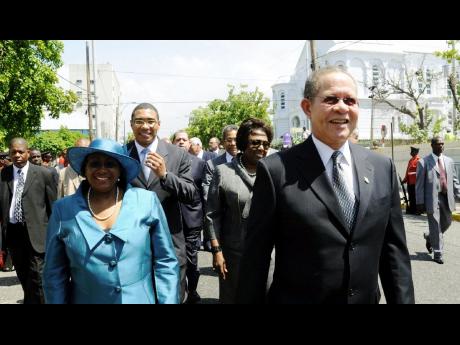 Something was missing from the ceremonial opening of Parliament yesterday.

Party faithful on both sides of the political divide obeyed a directive not to disturb students sitting the Grade Six Achievement Test and stayed away from the opening ceremony like claustrophobes from a closet.

Police and army personnel outnumbered any other group at the annual event. There were a few folks milling around inside the Bustamante Industrial Trade Union grounds, even fewer around the Jamaica Manufacturers' Association headquarters, a handful in the synagogue and a smattering at the Jamaica National Heritage Trust at the corner of Beeston and Duke streets. But that was it.

There were no witty, verbal jabs from orange and green-clad supporters, no singing and no chanting as both parties entered. Anyone who wished for some form of excitement would be forced to return to the wishing well and retrieve their coin.

Members of the security forces were more busy with checking the identification cards of media personnel and other invited guests walking towards Gordon House. And all those House-bound walkers had to be mindful of was a few drops of curious-looking, brown, smelly lumps on a section of the road. The only need for any guns was for the precise movements of the military guard of honour as they carried out their formations.

Full attention was snapped back on as Governor General Sir Patrick Allen, attending his sophomore opening as head of state, inspected the aforementioned guard before heading inside to give the throne speech.

With the only hassle coming from the heat, time flew by and minutes before noon, the chauffeur-manned high-end vehicles were recalled into action, whisking away the bigwigs at the ceremony's end.