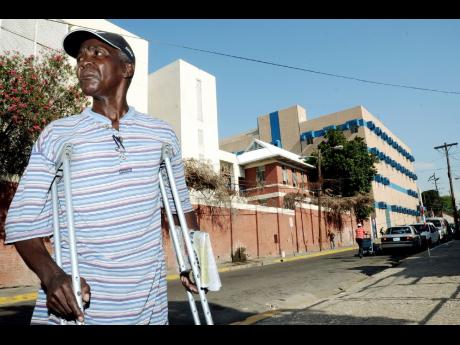 Roy Davis, an outpatient at the Kingston Public Hospital, is hoping his long waits will become a thing of the past when the health ministry gets rid of its debts. - Norman Grindley/Chief Photographer

However, medical personnel, hospital administrators and patients all seem to agree that this was far from what was needed by the sector that has seen an increase in demand since the Government's 2008 decision to abolish user fees in most public-health facilities.

"The thing not working right. Sometimes you have to wait long to get treatment. Me come from all 6 o'clock and all 2:30 mi nuh get treatment yet," Roy Davis said as he approached the Kingston Public Hospital (KPH) outpatient clinic recently.

"The doctors and nurses try them best but me get prescription and me can't get the drugs all now," Davis added, as he pointed to a torn paper dated one month earlier.

Davis was supported by another KPH outpatient Joan Wright.

"It bad. You have to wait too long and you get appointment for this or that and when you go, you get another appointment again," Wright said.

"The hospital is short-staffed, and while the doctors and nurses try their best, you can see that they are short-staffed. When you go to the pharmacy, you have an everlasting wait."

The Government continues to point to the abolition of user fees in most public hospitals as one of its major achievements since taking office in 2007, but it is clear that the increased number of persons seeking treatment has placed a burden on the hospitals and left them wobbling.

That was underscored by president of the Medical Association of Jamaica, Dr Winston De La Haye, following a visit to the KPH last year.

"Physicians in the clinics empathised with the dissatisfaction expressed by patients about the long waiting period, but assured me that they were doing the best they could with the available resources," De La Haye said, as he voiced concern about the high doctor-to-patient ratio.

The public-health sector also ran out of some basic items, including blood bags during the year.

"This is a major crisis because there is usually not enough blood in the system, and when you plead and beg and get persons to agree to donate the blood, we have to be turning them away," an official of the Blood Bank bemoaned before the health ministry moved to correct the problem.

Opposition Spokesman on Health Dr Fenton Ferguson added his voice to those claiming that the KPH was facing a shortage of staff in critical areas and a lack of equipment, including orthopaedic items and CT scan.

(bulk of money to regional bodies)

Purchase of goods and services: $4.1b