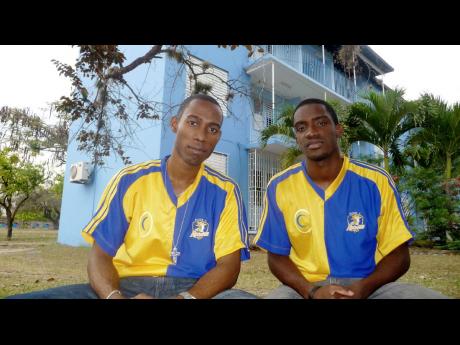 They started out not liking each other, even while attending Cornwall College in Montego Bay, but after more than three years of working together, the bond they have built is reaping benefits in their personal and professional lives.

Duane McIntosh and Sandre Malcolm, the marketing students who recently won the University of the West Indies (UWI) Guild of Students Entrepreneurial Competition for their organisation, Breakdabox Marketing Company, are now hardly apart from each other.

The 22-year-olds, however, came together after a chance meeting through hall orientation at the UWI, Mona in 2007. Subsequent meetings were facilitated by the positions they held on their block, Roosters - Duane as the cultural entertainment and activities chairperson and Sandre as external affairs chairperson. These interactions had them collaborating on events, which, they say, people have said were memorable.

Continued interaction revealed that they both had a passion for unconventional thought and a flair for marketing ideas.

Their latest brainstorm is the marketing and event-promotion company, Breakdabox.

"We set our premise on the (concept) that difference is always noticed. If it is the same as everything else, then you will walk past," Sandre said.

The two have defined responsibilities: Duane deals with organising the business, while Sandre provides the creative impetus.

They are currently approaching companies in Jamaica to market their brands on campus. They have made major pitches to these companies and are awaiting responses.

While it is early days yet, the two are already winning competitions. One of their crowning achievements was copping last summer's Scotiabank Be Competition, which had a cash prize of US$10,000. The victory was fraught with challenges, as Sandre, who was working in the US during the summer, did not make it to Jamaica for the presentation until the morning of the contest.

Sandre and Duane spent long nights preparing for the competition, with Duane quitting his job to focus on the task.

In the end, they were told that they turned the competition on its head with their innovative presentation.

In the meantime, they are still promoting parties and building their market presence through word of mouth and social networking on Facebook. They have also inked their first contract with Student Work and Travel, an on-campus printery.

Both are relishing the future and say that Breakdabox will continue to break new ground without losing its focus on raw creativity.

'We set our premise on the (concept) that difference is always noticed. If it is the same as everything else, then you will walk past.'