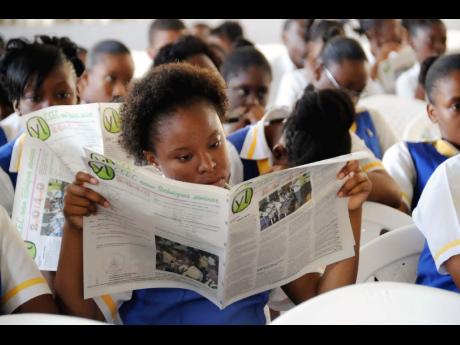 Preparation was the watchword at Tuesday's Caribbean Secondary Education Certificate exam workshop sponsored by The Gleaner's Youthlink magazine, which saw hundreds of students turning out at the Girl Guides Association of Jamaica headquarters in St Andrew.

The workshop series is directed at preparing students for regional examinations they will sit later this year.

Nnaka McKenzie, student of St Hugh's High School in St Andrew, said the seminar was very helpful in preparing her for mathematics.

"It was very informative and I think I am a little more confident about sitting the exam," she told The Gleaner.

Cynthia Cooke, principal of Camperdown High School in Kingston and the mathematics presenter at Tuesday's workshop, said she was impressed by the interest of the students.

"I watched their faces to see when they were in the dark so that I could shed some light, but I saw some light frequently," she said.

Noting the traditional trepidation of many Jamaican students who sit mathematics exams - which has been partly associated with a history of low passes in the subject - Cooke said she had to employ some basic strategies to engage the students during the sessions.

"The first thing you have to do is to turn them on, and you have to keep the class having some good vibes, and help the students to be confident at what they do," the workshop instructor added.

She said students had, over the years, made simple mistakes in past exams, which indicated a lack of preparation.

"I think sometimes the review process is not there because teaching is one thing, but exam preparation is not there. Some teachers tend to leave a lot of stuff for the end at the expense of revision."

Melrose Hamilton, a teacher at Haile Selassie High School in Kingston, praised the seminar, saying the workshop was tailored to get students exam-ready.

"This workshop helped the students to understand the topics more and I think they will develop a better attitude towards the topics," she said.

"I haven't started vectors yet, but the students were exposed to the topic and it seemed they grasped the context well, so I will just continue when I get back to school," Hamilton added.