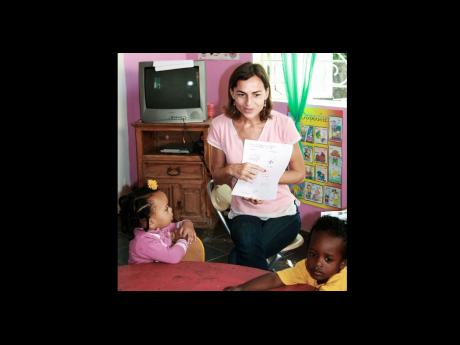 Aline Luna-Less conducts a session with two children at the Centre of Language and Culture preschool.

Aline Luna-Less, director and principal of the Centre of Language and Culture preschool, located at Grosvenor Terrace in Manor Park, wants to create multicultural and bilingual citizens of the world starting from ages two to four.

Her mission is to "unite people through knowledge, education and experiences from different cultures and languages and to remove the barriers that delay human unity".

Started in September 2009 and registered with the Ministry of Education as an independent school, the CLC's preschool has a multicultural atmosphere where children have an English curriculum just like normal kindergartens but, in addition, they do five hours of French and Spanish each week in a cultural way with native French and Spanish teachers.

The children are taught using songs and games and speak French and Spanish during snack times as they make their requests for various items. Through this process, Luna-Less says, "Children begin to relate to things visually and after two to three weeks they know that when Tia Mary or Tati Luna comes, it's Spanish or French time."

She notes that it was difficult at first when the school started but it has grown and parents are very supportive. The parents come from a multicultural background themselves for the most part - French, Scottish, Israeli, Canadian, and Swiss. Some of the parents are married to Jamaicans and live and work here. Others are Jamaican parents who have studied abroad and had to learn a second or third language and want their children to have the experience and diversity of speaking a second language.

"An important factor for parents is the class size which is 15 children to two teachers," explained Luna-Less. In addition, she said the staff "is really loving and really cares for the children".

Luna-Less, who was born in France, noted that for those parents who are foreign nationals, it is important to them to know that the CLC's staff can communicate with their children in French, Spanish or English.

According to Roxanne King, mother of two-year-old Joshua, who attends the CLC's preschool "She has never been happier ... . He started in January and the progress has been excellent. At CLC, my son is learning two foreign languages and he now speaks with me in any of them when he feels so inclined. His social skills have improved in terms of sharing, listening and sitting quietly."

Additionally, she notes that she gets much more from the CLC's preschool than she got from his former school whose fees were the same.

King said: "Joshua gets homework and asks for more." She said his enthusiasm is amazing as children tend to shy away from doing their homework.

"He's happy and well adjusted in this environment and I leave him there knowing he is loved and cared for by everyone."

For Wassana May Crocer, whose son Paul goes to the preschool: "It is because the school is close to our house, the class size is small, (with) experienced teachers from England, France, Peru, multi-languages (spoken) and so far everybody is happy with the school.".

Luna-Less believes children who come to the CLC's preschool have a greater opportunity of being comfortable with learning and speaking a foreign language, particularly if they continue on through to prep school. This, she says, makes it much easier for them to participate in a foreign-language curriculum at the high school and tertiary level, especially as it is a requirement for students at university to complete a foreign language as part of their university degree.