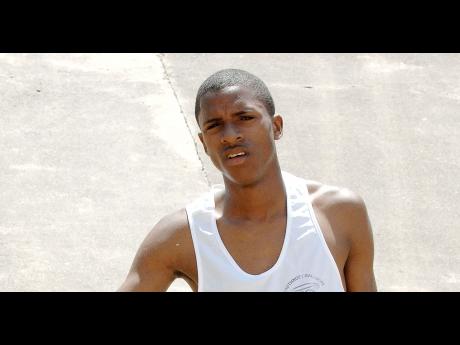 Romane Bolt of Aabuthnott Gallimore High stands with his spikes in his hand after competing in the Class-One boys' 400m heats, on day two of the Inter-Secondary Schools Sports Association/GraceKennedy Boys and Girls' Championships, at the National Stadium yesterday. - Ian Allen/Photographer

As Romane Bolt settled into the blocks for the seventh heat in the Class-One boys' 400 metres yesterday, the gathering in the grandstand at the National Stadium looked on curiously, as they wondered if the performance would be in keeping with the name.

The end was rather anticlimactic as Aabuthnott Gallimore's Bolt, the cousin of the World and Olympic record holder in both the 100m and 200m, Usain, finished eighth in the event in 54.99 seconds. He was seen favouring his left hamstring at the end of the race.

"I am not feeling too bad about the race although I am disappointed that I did not make it to the semi-finals, but it is life," said the younger Bolt. "I have to go and train hard and come again."

Romane can, however, take heart from the fact that the double world-record holder has also suffered numerous disappointments and injuries in his career before rising to the status of World and Olympic champion.

"I can reach as far as my cousin, I just have to work hard and try to reach there," said Romane. "My personal ambition is be a professional athlete like my cousin and I think I have what it takes," he added.

The 17-year-old is also of the view that the decision of whether or not the World Athlete of the Year runs the 400m is up to him.

"He (Usain Bolt) has to know for himself what he can do, we know he can run it but it depends on him."