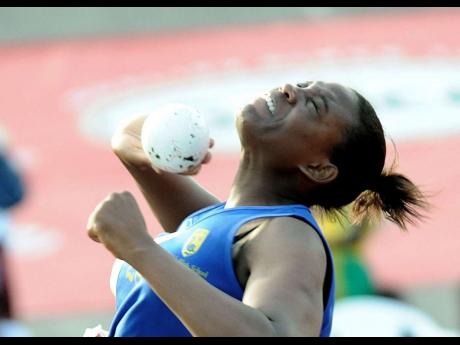 Two days, two records; Candicea Bernard cannot be tamed. The talented St Hugh's athlete produced her second record-breaking throw in as many days at the Inter-Secondary Schools Sports Association/GraceKennedy Boys and Girls' Championships at the National Stadium yesterday, after smashing the girls shot put open record to post a new mark of 13.24m with her very first throw, in fact the first throw of the event.

At press time, with five of the six finals accounted for, Vere Technical were still in front on 28 points, with St Hugh's, 24, and Wolmer's, 20, rounding off the top three.

Meanwhile, in the shot put ring, Bernard managed to better the old record of 12.87m, which was set at last year's championships by her former schoolmate, Micara Vassell. This follow's Bernard's 46.76m meet record in the Class One girls discus on Wednesday.

Bernard was elated with the win, but admitted being a little surprised with the shot put record.

"This is my last Champs and I have really enjoyed it; I'm feeling very good about this. I have a phobia with the stadium, I've always felt like I can't throw anything here in front of the crowd so to get the 13 metres I'm very surprised," said a smiling Bernard after receiving her medal.

Things were also scorching in the long jump pit with Manchester High's Chanice Porter twice breaking the old record of 6.11m. She first posted 6.23m during the early stages of the Class Two long jump final, then lengthened that distance to 6.43m as she cleared a path to what appeared a certain gold medal.

At press time, with the final eight jumpers yet to be decided, Porter was being trailed by triple jump champion Rochelle Farquharson (STETHS), 6.14m, and Janieve Russell (Holmwood), 6.00m.

Fifteen-year-old Chennel Palmer of Vere Technical produced her best jump of the season, 1.70m, to capture the gold in the Class Three girls high jump, in what was a mild upset over pre-meet favourite Krista-Gay Taylor (Convent of Mercy Academy, Alpha), who won at the Carifta U-17 trials recently, with the same 1.65m height that she cleared for third behind her teammate, Tatiana Wolfe, who also cleared 1.65m.

Defending Class Two discus champion Sasha-Gay Marston (Edwin Allen) is expected by many to reclaim her title this year, and she continued her dominating ways by registering her best throw of the season, 43.14m; making her the number one qualifier for today's final. The St Jago duo of Central Champs winner Kellion Knibb, 42.69m and Fayon Gonzales, 41.00m were next best, while St Hugh's Devene Brown, who is also tipped to secure a medal, posted 34.40m to also book her spot in the final.

In today's girl's Class Three 1500m finals, Edwin Allen's Marleena Eubanks and St Elizabeth Technical's Alethia McLaughlin are expected to square off for the top podium spot after the latter got the better of the season leader in their Class One heat yesterday morning.