Campbell running against the clock 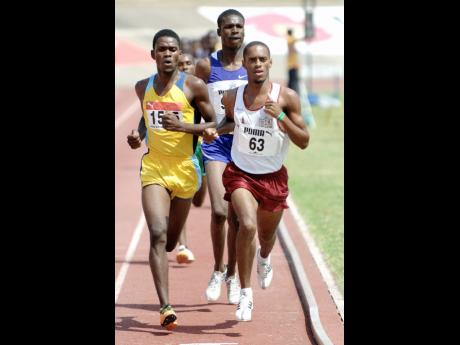 Kemoy Campbell of Bellefield High has established himself as one of the top distance runners in the island.

He created history earlier this month by becoming the first English-speaking Caribbean athlete to win in any category at the NACAC Cross Country Championships, when he took the 6K junior event in a time of 17:59.9 seconds.

Campbell has, however, not always been a winner as he lost in his first outing at Boys and Girls' Champs four years ago in the 1,500m class one. He decided right there and then that he was going to use that defeat as a motivation to do better in the future, and that he has done.

"I came here to win (in 2006) and I heard the crowd screaming and thought it was me, but I got beaten by a Kingston College (KC) athlete," said Campbell.

"I went back to the drawing board and I saw where I lingered in the finishing and that's how I got beaten, so I then started finishing faster and it has worked for me," he added.

He did, however, win the 5,000m in his first year and has been winning ever since.

Campbell said: "I am motivated by the talks I get from my coach and my personal ambition is to break the records as I am just running against the clock. I am looking at 3:45 in the 1,500 because that's what I am here for, so I am really looking forward to that. I already have the Champs record but I am looking to lower it."

The 19-year-old is running in his final season at Champs and will next turn his attention to the CARIFTA Games, followed by the World Juniors.

"I am looking forward to the World Junior this year and I expect to do pretty well there. I will also be going to CARIFTA and I am hoping to get the two records there as well."