Maradona would 'welcome' Messi surpassing him 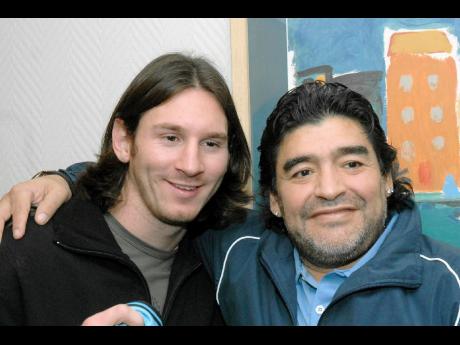 Diego Maradona says he would be happy if Lionel Messi surpasses him as a player, but the Barcelona forward has downplayed comparisons with the Argentine great.

Messi, who plays under Maradona for Argentina, has been in superb form recently and has scored a Spanish league-leading 25 goals out of 34 in all competitions this season.

Messi's hat-trick against Zaragoza on Sunday - his second in eight days - brought the comparisons with Maradona, who led Argentina to their second World Cup title in 1986.

"I don't like comparisons," Maradona said on Radio Cooperativa. "But if someone has to surpass me, then let it be an Argentine. If Leo is better, I welcome it."

In a separate radio interview yesterday from Spain, Messi said he was far from Maradona's level.

"Diego is Diego and millions of years can pass and he will still be the greatest in history for me," Messi said. "I intend to have my career, make my mark and get into the record books with things I have done. I'm not trying to be like Maradona."

The 22-year-old Messi has been criticised for failing to reproduce his club form for Argentina, but Maradona was in Europe recently and reassured the player that he was happy with his performances.

The Argentina coach also indicated that Messi's form at the World Cup in South Africa from June 11 could lift if he is allowed to play a roaming role on the field.

"I told him I'm fine with his level of play because his time will come," Maradona said. "He shouldn't take the criticism badly.

"I don't believe in fixed positions, much less with Messi. He has enormous potential and should have the freedom to move to be in contact with the ball."

Messi agreed that his form for Argentina needs to improve.

"What I want is to perform with that national team as I have with Barcelona," Messi said. "I know I have had good games (with Argentina), but I'm not at the same level as I am with Barcelona. I'm going to try to change that."

Argentina play Canada in a friendly on May 24 in Buenos Aires and then head to South Africa for their opening match on June 12 against Nigeria in Group B.