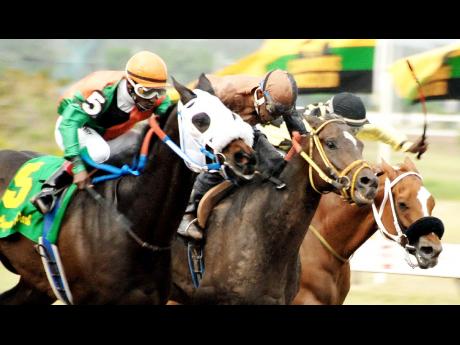 The stretch-running bay gelding HAIL THE GENIUS (centre), ridden by Aaron Chatrie after going off at odds of 6-1, storms through in the closing stages to win the open allowance feature over 1200 metres, in a driving finish, from FOREVER MINE (left, Wesley Henry) and BRASH & SASSY (Paul Francis), at Caymanas Park on Wednesday. -Colin Hamilton/Freelance Photographer

Tomorrow's Pick-9 will embrace races two to 10, the Super-6 from the fifth to the 10th. We look at the Super-6 which gets underway with a $350,000-$300,000 claiming race to be contested by nine starters over the straight. Taking all factors into consideration, victory should go to the down-in-class MARK TO MARKET (Carlton Malcolm up), who not only enjoys galloping over the straight, but could well be a cut above these horses.

MEDUSA, who beat all barring MAGDALA over, 1200 metres on March 13, is preferred to LIL 'TIGER and CENTANNI in the knotty-looking sixth race over 1200 metres, whereas LITTLE LINK, based on his close fourth to GRANDI ELANI over a mile recently, holds the key to the seventh race over 1400 metres for maiden three-year-olds.

SAMBA DANCER, now eased in the weight and running from an in-form barn (Ryan Darby), should turn the tables on recent conqueror MR. WICKER and the very fit BULLSEYE in the eighth race over 1400 metres for $180,000 claimers.

The last two races should be won by BELOW THE WAIST and the lightly raced but improving SKIPAWAY PRINCE (Omar Walker up) in the night pan for the Al Gopie Memorial Cup for maiden four-year-olds over the straight five course.

A speedy sort, SKIPAWAY PRINCE finished a close fourth behind BUTCHER GAL over the course on February 17. With the blinkers now removed, he should recoup losses in a maximum field of 16.