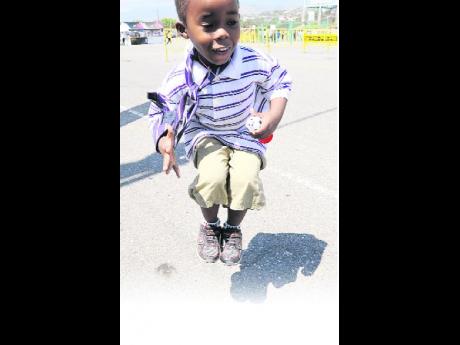 As little as Matthew Richards is, the importance and excitement of the ISSA/GraceKennedy Girls and Boys' Championships has not escaped him. - Ricardo Makyn/Staff Photographer

It's minutes after nine in the morning and the stillness of the atmosphere outside the National Stadium gives no indication of the magnitude of the event which is taking place within the oval-shaped walls of the island's sporting headquarters.

Not a soul is in sight at the ticket booth, metres away from the facility's main gate. Security personnel entertain themselves while trying to appear firm and attentive as a single patron approaches them for the mandatory search that greets each spectator upon entry to the venue.

Vendors form a human chain as they display their items, hoping for a busy day; hoping for a return on their investments.

Inside the venue is not much different. A calm blankets the stadium as sprinklings of spectators brave the sun in the bleachers section, while the grandstand crowd continues to swell with each passing minute. Champs is truly beginning to take shape.

A giant helium-filled Grace-branded balloon hovers overhead, while a 10-foot-long electronic board offers even greater presence to the meet's major corporate partners. Everything seems in place; this is a world-class championships in full motion.

The ever-present supporters of defending champions Kingston College are out from daybreak, decked out in their full purple armoury, and by midday their customary positions in the vicinity of the finish line now form a sea of purple, while the Calabar's and Wolmer's masses also converge at their regular spots.

Out of nowhere, a horn-like sound cracks the midday calm; a few screams erupt shortly afterwards to the left of the grandstand. Umbrellas are popping up everywhere in the bleachers. Drums suffer to rhythmic beatings as the noise levels inside the venue rise a few decibels.

"Mi can feel the vibes already man, a pure t'ings already. You can only imagine wah a go gwaan tomorrow," says one Jamaica College schoolboy, who is too caught up in the excitement around him to give his name.

The Wolmer's contingent seems to have sneaked inside the venue with little or no fanfare, but are soon the centre of attention when a massive maroon-and-gold banner is rolled out by their fellow students near the 200m starting point in the bleachers section. The Heroes Circle-based students revel with wanton excitement, with their school very much in the mix and gunning for their first boys' title in 54 years. Who could blame them?

The stadium is now a hotbed of excitement and the fans are soaking it all up.

"This is what Champs is about; great performances and a high-energy crowd. The spectators are a big part of what makes this meet so special over the years," says Natasha Williams, who has travelled from West Palm Beach in Florida to witness the championships, after being away from the island for eight years.

At dusk, outside the venue is anything but serene as security personnel are busy conducting searches as patrons file inside the venue. A few ticket pedlars discreetly solicit sale for their tickets as vendors, most of them with pleasant smiles stapled across their faces, tend to their customers.

Champs 100 is in full swing, and it can only get better as it makes its final lap today.

The public is being asked to observe the following traffic changes leading up to the end of the annual ISSA/GraceKennedy Girls and Boys' Championships.

Arthur Wint Drive will operate as a one-way from Tom Redcam Avenue to Roosevelt Avenue.

The upper section of Arthur Wint Drive from Mountain View Avenue to gate E4 will operate as a one-way to access the stadium car park.

At the end of the event

Arthur Wint Drive will be operated as a one-way from the stadium to Tom Redcam Avenue.

Roosevelt Avenue will be operated as a one-way from the stadium to Stanton Terrace.

Latham Avenue will also be operated as a one-way from Roosevelt Avenue to Old Hope Road.

Road closures and traffic diversion will be in effect as of 2 p.m. to facilitate the smooth staging of the event.

A sterile area will be created along Arthur Wint Drive between Roosevelt Avenue and gate E4.

JUTC buses and other vehicles travelling along Arthur Wint Drive to Mountain View Avenue will be diverted on to Roosevelt Avenue and Stanton Terrace.

There will also be a police checkpoint at Stanton Terrace/Roosevelt Avenue and only VIPs in vehicles wearing stickers will be allowed access to get to the stadium via gate E2.

Entry points for members of the diplomatic corps, teams and officials will enter through gate E2.

Vehicles of accredited media personnel will enter through gate E10 (Nannyville access) and park in the media area, while the general public will go through gates E4 to E8.