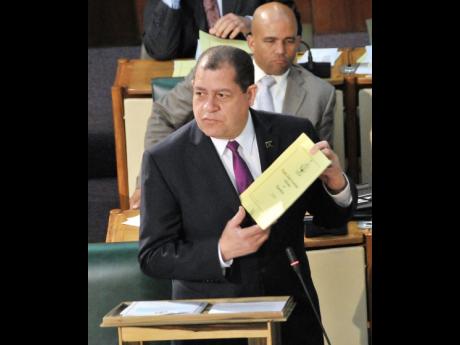 Minister of Finance and the Public Service Audley Shaw holds up a copy of the Public Sector Consolidated Estimates of Expenditure for 2010/11, a report tabled for the first time alongside the National Budget, in the House of Representatives on Thursday. - JIS 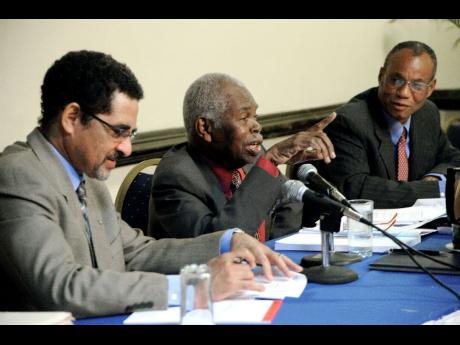 The Government has allocated a further $40 million to the commission of enquiry into the 1990s collapse of the financial sector, despite coming under fire in January last year for its spending on the commission.

This would mean that spending on the now-stalled commission of enquiry would be in the region of $120 million - a figure which could grow based on the days allocated for the sittings.

The additional budget for the commission was disclosed yesterday in the 2010-2011 estimates of expenditure tabled in parliament by Finance Minister Audley Shaw.

While there was no other comment on the figure, Shaw has already made it clear that he is committed to having the commission continue as long as necessary.

Shaw drew most of the flak in January when members of the public chided the Government after news broke that close to $80 million had been budgeted for the FINSAC commission.

The majority of that money was to pay the three commissioners and rent for the facility which housed the enquiry.

Unruffled by the controversy, Shaw argued that the money was being well spent.

"Compare the cost of an enquiry of $79 million to $140 billion, which is what it (the financial sector meltdown) has cost the country," declared Shaw while the storm raged.

He argued that the commission of enquiry was a truth-seeking exercise which powerful interests were attempting to derail.

The enquiry stalled after lawyers representing former finance minister Dr Omar Davies and three others sought a declaration from the courts on whether Carey should continue as its chair.

The matter is now before the Judicial Review Court.