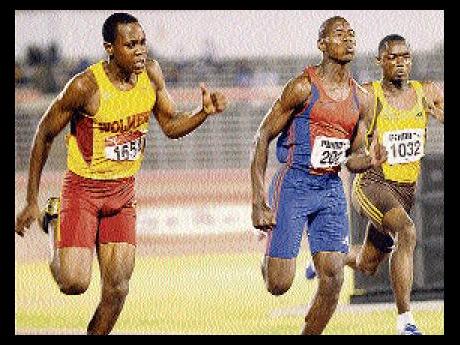 Champs 100 is going down to the wire. It's a three-way battle for the boys' title at the GraceKennedy-sponsored Inter-Secondar Schools Sports Association (ISSA) meet as competition enters its fourth and final day.

Calabar High, who grabbed the lead on the second day, are still in front on 106 points after 16 finals. But breathing down their necks are pre-meet favourites and defending champions, Kingston College (KC), on 85, and dark horses Wolmer's Boys, 83. Wolmer's are seeking to lift the trophy for the first time in 54 years.

The Champs Preview had predicted that defending champions KC would retain their title with 210 points, Calabar a point behind (209) and Wolmer's three behind (207). But it now appears unlikely that any of the leading contenders will go past 200 as they have been ravaged by injuries and mistakes on the track.

Wolmer's are by far the strongest of the three in today's track events but Calabar, with an expected one-two in the Class One shot put and likely victory in the medley relay, could hold on and surprise their rivals.

On the other hand KC are hoping to pick up valuable points in the relays, including victory in the Class Two 4x100m.

The highlights of yesterday's evening session were two record-breaking runs by Kemoy Campbell of Bellefield High in the Class One 1500 metres and St Jago's Kevaughn Rattray in the Class Three 100m final.

Campbell, who also holds the national junior record at 3:42.67, led from gun to line to shatter his own Champs record, clocking 3:45.54 to shave just under three seconds off the 3:48.43 he set last year. Corey Williams of Tacius Golding was second in 3:58.29, while Edwin Allen's Rogeek Rochester was third in 4:00.18.

"I am feeling pretty excited and happy because I came here for the record and my coach encouraged me and it paid off. I wanted to go a little lower but I am still very happy," Campbell said.

Wolmer's won the Class Two and One 100m.

Faster than class one time

Skeen's time was faster than the 10.49 Julian Forte registered to win Class One.

Kemar Bailey-Cole of Old Hardour, 10.53, was second and Jeffrey Josephs of Camperdown third in 10.55.

Titchfield's Shavanes Robinson also put his name in the record books when he became the winner of the first Class Three 1500m final run at Champs. Robinson pulled away from his rivals late to win in 4:25.67. Guy's Hill's Kemanie Mitchell was second, 4:27.18 with Calabar's Orville Dixon earning six valuable points for his school, with third in 4:28.05.

Calabar and Wolmer's both scored well in the Class Three long jump. Abraham Robertson of Wolmer's, helped by a plus 6.1 metres per second wind, jumped 6.93m to win gold as Calabar's Tarull Clarke, 6.75m, and Edward Clarke of JC took the next two places. Calabar's Jullante Walker was fourth (6.64m) and Wolmer's Hackeem Lewis fifth, 6.17m.