Rajah to skip away from the 'Prince' 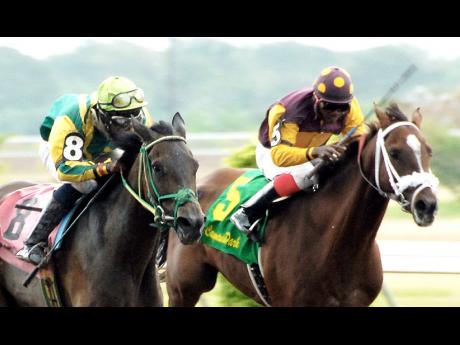 HAILSTORM (left), with Oral Bennett aboard, goes by long-time leader FLY TO THE MOON (Dane Nelson) to win the seventh race for 5-y-o non-winners of three over 1600 metres at Caymanas Park on Wednesday. HAILSTORM, who turned for home 11 lengths sixth, produced a terrific stretch run to win going away by 1 3/4 lengths. She is trained by Margaret Parchment. - Colin Hamilton/Freelance Photographer

Today being Jamaica Jockeys' Guild Day, the late jockey Al Gopie is being remembered with the race run annually in his memory at Caymanas Park.

The Al Gopie Memorial Cup for native-bred maiden four-year-olds and up is one of the co-feature races on the well-supported 10-race programme. The other is the restricted allowance V for the Jamaica Jockeys' Guilld Trophy over 1400 metres, this confined to native-bred five-year-olds and up (non-winners of two).

A popular lightweight jockey in his time, Gopie was killed in a spill at Caymanas Park in the penultimate race on Saturday, November 20, 1999.

Although the race has attracted a maximum field of 16, indications are it will come down to a straight fight between the lightly raced SKIPAWAY PRINCE under champion jockey Omar Walker and the well-forward debutante RAJAH, with 4.0kg claiming apprentice Fabion 'Drive By' Jones aboard.

The Gregory Bucknor-trained SKIPAWAY PRINCE has shown good speed in both races so far, the more recent on February 17 when finishing a close fourth to BUTCHER GAL after leading for just over 800 metres.

Although lightly trained, SKIPAWAY PRINCE reports in good condition and his speed could play a decisive role in the outcome, especially with Walker now taking the ride.

Still, RAJAH has looked well in his preparation, galloping five furlongs from the gates in 1:02.3 on March 15, the first four in 47.3.

Trained by Norman Palmer, the bay colt by Pleasantly Perfect out of Time Crisis also looked sharp in a 23.4 quarter-mile spin and all in all, his preparation seems on cue for him to get off the mark immediately with 53.0kg. He should win from SKIPAWAY PRINCE, ALIZ and NIKAN'S CHOICE.

The Jamaica Jockeys' Guild Trophy race has attracted eight starters, including top contenders ROYAL DREAMER, HARDWAR PRINCE, MISS PAM AND ME and the front-running COLORADO BABE, who will have to be caught.

ROYAL DREAMER (Kerry-Gayle Robinson up) reports with a lot in her favour and, based on her close third to FAREED over 1200 metres last Boxing Day, will not be easily denied in this cheap field with only 51.0kg.

The five-y-o chestnut mare from the stables of in-form trainer Ryan Darby will relish the additional 200 metres of this race and gets the nod over HARDWAR PRINCE, the mount of title-chasing jockey Dane Nelson.

Other firm fancies on the card are COUGWAY in the first race; SUGAR'S IMAGE to repeat in the third; DIABLOCIAL KID to do likewise in the fourth; MARK TO MARKET in the fifth; LIL'TIGER over MEDUSA in the sixth; and BELOW THE WAIST in the ninth.