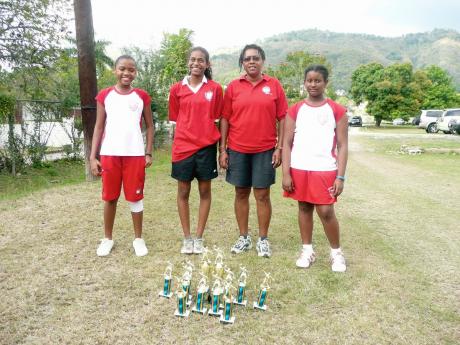 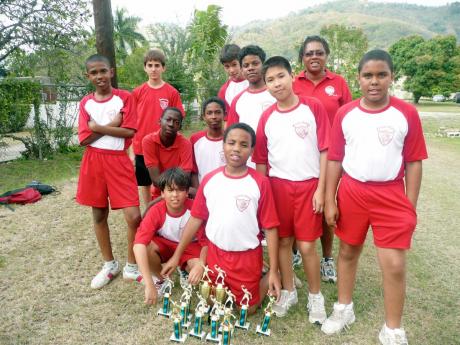 After the round-robin matches in the bridge association's tournament for the Ashenheim Cup played among teams of four, the team of Rex James, Judy Ziadie, Trevor Jones, Charles Williams and Calvin Wong easily headed the standings with 101 Victory Points from the second-place team of Winston Chin-You, Audley Astwood, Marlene Fulford and Monica Cools-Lartigue, who tallied 89 Victory Points. These two teams will meet in the final in which the top team, led by Rex James, will carry forward an advantage of 4 International Match Points.

Today, the association's regular last-Saturday tournament will be played at the Police Officers' Club starting at a new time of 2 p.m. All social bridge players are urged to turn out for this event, billed as a more relaxed game with an emphasis on fun, in which last month's winners will carry a handicap for this month's event.

Third place in the male category went to Scotia Defenders of The Bahamas while fourth place went to Jamaica's University of the West Indies.

Meanwhile, International Jammers of the US took the female title,after they crushed Sharpshooters, also of the US, 3-0. Glamorgan from Trinidad placed third, and Jamaica's MOSA fourth. Millicent Sylvan of Sharpshooters was voted the tournament's female MVP. Simone Mahabeer of sponsors Singer Jamaica Limited handed out the prizes.

Watson Grove (19), third place on goal difference, have a fairly difficult task to maintain their position as they clash with semi-final-bound Christian Pen (26) in the feature match at the Hellshire football field at 3 p.m. In the earlier game at 1 p.m., fifth-place Hamilton Gardens (17), with a slim semi-final chance, take on Hellshire United (11).

For Hamilton Gardens to advance they need to beat Hellshire and hope that either Watson Grove or Westport lose or draw. Westport (19) play against Braeton United (13) in an opening match at 1 p.m. at the Racing football field, while already-qualified Racing United (30) take on last-place Daytona (seven). The two-leg semi-finals are set for April 11 and 18.

The all-important strike was scored by Kimani Finn early into the second half. At the end of the match, Leander Marshall, president of the Portmore Football League, handed over the championship trophy to a jubilant Passagefort United team.

The last set of matches in the quarter-final round of the ISSANationalUnder-19 volleyball competition were played on Tuesday. The brackets are now set for the semi-finalmatchups.

The venue for the semi-finals and finals will be the G.C. Foster College on Thursday, April 1 starting at 1 a.m.

Kingston, St Thomas, Manchester and Hanover will be represented in the last four of the Insport All-Island Community Football Championship following quarter-final action on Sunday, March 21.

Raymond Tulloch's 68th-minute strike was enough to give Kingston champions Caribbean Strikers victory over Azteca United of St Mary at the Constant Spring Stadium and a place in tomorrow's semi-finals.

In tomorrow's semi-finals, the games on are Winchester of St Thomas vs Caribbean Strikers from Kingston at Constant Spring at 3 p.m. and New Green from Manchester take on Claremont Hanover at Kaiser, also at 3 p.m. They battle for the top prize of $500,000 and the final is set for April 10 at the National Stadium.

Caribbean Strikers defeated Homestead Under-25 of St Catherine 3-1 on penalties under heavy windy conditions at Breezy Castle. Both teams were level at 0-0 after extra time.

Penalties were also required at the Urban Development Corporation playing field in Montego Bay after both sides remained goalless after extra time. In the penalty shoot-out Claremont of Hanover outscored Albion 4-2.

New Green of Manchester came away 1-0 victors against Ocho Rios United of St Ann at Discovery Bay, with Henry Malcolm scoring the all-important goal in the 38th minute.

Wray & Nephew Limited and Island Delight Restaurant and Sports Bar will pool resources to stage a lucrative eight-ball pool tournament on April 3 and 4 at Byndloss Cross Roads in Linstead, starting at 3 p.m. both days.

The latest Division I standings are as follows: Eagle View and Caribbean Classic locked at the top with 54 points from 16 matches, followed by Fort International with 46 from 16.