Edwin Allen, Holmwood going down to the wire 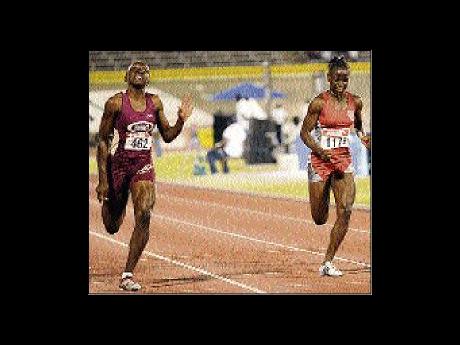 Herbert Morrison's Antonique Campbell (left), who clocked 11.78 seconds, wins the Class One girls 100-metre final ahead of Diandra Gilbert of The Queen's School (11.78) and Holmwood Technical's Ornella Livingston (out of photo), who clocked 11.82 for third. - Ricarodo Makyn/Staff Photographer.

It's going down to the wire in the girls section at the Inter-Secondary Schools Sports Association (ISSA)/GraceKennedy Boys and Girls' Championsips at the National Stadium, with Central champions Edwin Allen staving off defending champions Holmwood Technical going into today's final day of action.

The Frankfield-based Edwin Allen outfit, who are hunting their first lien on the trophy, hold an eight-point advantage over the seven-time defending champions, after amassing 111 points. Holmwood produced a spirited late-afternoon burst to close what was threatening to be a dangerous gap, finishing the day on 96.33 points.

Ten-time Carifta champion Natoya Goule of Manchester High produced the highlight of the day, setting a new mark in the Class One 1500m, as records continued to tumble.

Goule, who recently helped Jamaica to a third-place finish in the female section at the NACAC Cross Country Championships in Trinidad, stopped the clock at 4:29.81, just inside Kayann Thompson's six-year mark of 4:30.79.

Goule was extremely happy with the record, but is already turning her attention to today's 800m final.

"I feel great knowing that I got the gold medal and the record, because that's what I came here to do. Now I'm looking forward to another record in the 800m, I'm going to do my best," Goule shared.

Favourite and defending Class Two discus champion, Sasha-Gay Marston of Edwin Allen, was also in record-breaking form, securing the gold medal with a heave of 45.65m, erasing the 14-year-old mark of 43.42 which was set in 1996 by Manchester's Tanya Thomas.

The silver medal was captured by javelin champion, St Jago's Kellion Knibb, who also bettered the old distance with a 43.65-metre throw. Her teammate, Fayon Gonzales, was third with a distance of 41.23m.

Earlier in the day, 16-year-old Knibb produced her best throw the season, 41.04m, to secure her javelin gold in a mild upset over Edwin Allen's Ann-Marie Duffus, who finished third after achieving a best distance of 39.72m. Duffus, who also lost the event last year when she was favoured to win, albeit under questionable circumstances, also finished behind Tanesha Clarke, 40.72m, as St Jago continued to make noise on day three with a one-two finish.

Sisters Nikita Tracey, 57.42, and Ristananna, 58.96, continued Edwin Allen's questioning of the Holmwood juggernaut in the finals of the 400m hurdles Ppen event, where they finished first and second, ahead of Wolmer's Danielle Dowie, 59.04.

Herbert Morrison's Antonique Campbell sprinted to a 11.73 triumph in the Class One 100m final, with Diandra Gilbert of The Queen's School finishing second in 11.78, while Holmwood's Ornella Livingston ended third with a time of 11.82.