Williams breezes in for Champs 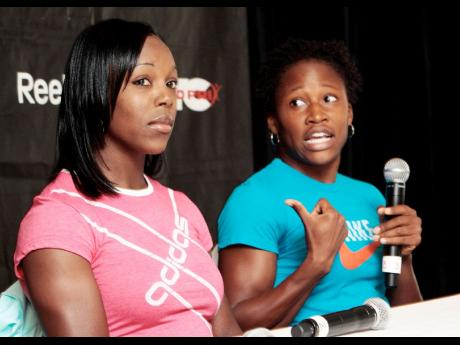 Former World Championship gold medallist, Lauryn Williams, will be looking to preserve herself this year as she tries to correct some flaws and get ready for next year's World Athletics Championship to be held in South Korea.

"We are just taking it one day at a time, one step at a time and preparing myself and making sure I don't do anything silly this year that would make me not healthy for next year," said Williams.

"The idea is to focus on the details. I am known for having really raggedy arms, so that's something we are really working on this year, trying to get the arms in the right working order, we are just focusing on the details this year to be ready for next year because that is what is really going to matter," she added.

Williams flew into the island yesterday to attend the 100th staging of the Inter-Secondary Schools Sports Association (ISSA)/GraceKennedy Boys and Girls' Championships.

"Yes I came for Champs specifically. I have been training Mondays to Fridays so I had an early work out today (Friday) and I had the weekend off and wanted to do something fun and I think this is a great opportunity for me to come out here, knowing that this is the 100th anniversary of Champs and to see what it is all about," Williams explained.

Williams is of the view that a meet of this nature has a huge impact on the young athletes, as the support the youngsters get will inspire them to go on and become excellent champions on the world stage.

This is not the American star athlete's first visit to the island. But it is her first time attending Champs.

"I was here first time in 2002, that was when I first got my passport, I came for the Junior World Championship," she said. "I have been here like five or six times and I think it is a beautiful place, the weather is always sunny, it is nice; so I am really looking forward to this beautiful country and having a good time out here."