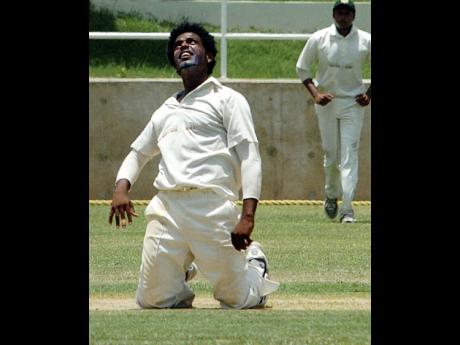 Kensington Cricket Club's technical director, David Bernard Sr, is looking forward to another outstanding display from spinners Dennis Bulli and Akeem Dewar, when his team plays the Portland Cricket Association team in the second round of the Jamaica Cricket Association (JCA) Senior Cup this weekend.

Bulli and Dewar, who are both former national youth standouts, were in dazzling form last weekend, sharing 16 wickets to guide the east Kingston campaigners to an innings and 29 runs win against St Catherine Cricket Association at Port Esquivel.

The left-arm Bulli, who topped the bowling averages two seasons ago and spent most of last season playing overseas, claimed five for 29 and three for 29 in the match, while Dewar, who was voted the most valuable player at last season's regional Under-19 championship, pocketed three for 60 and five for 25.

"Both are very good spinners of the ball, who are capable of representing the country at the senior level, as we speak," said Bernard, who is also the physical trainer for the national senior cricket team.

"This is even more so as it relates to Bulli, as having travelled with the Jamaica team, I don't see any spinner in the Caribbean right now who spins the ball as vigorously as he. He has a very bright future," Bernard added.

Kensington will also have in their line-up Wavell Hinds, David Bernard Jr and young batsman, Horace Miller, who at different stages of the just-concluded regional four-day competition played crucial roles in Jamaica's securing a third straight hold on the title.

These facts, however, do not deter Portland's Godfrey Flemming. According to him, his troops have always performed well against Kensington and this time around he expects nothing different.

"Kensington has a good team, but we have no fear. We have always played against them and held our own and I don't expect this weekend to be any different," Flemming said.

In other Zone A matches, St Thomas will play away to Boys' Town and Kingston and St Andrew will host Lucas, while in Zone B, leaders G.C. Foster will play away to Clarendon, Hanover entertain Police and St Mary will travel to St James.

The JDF and St Catherine CA have drawn byes this round.