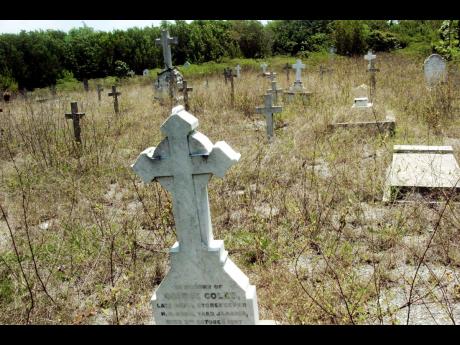 It has been a while since I wrote my last letter to you, so I thought I should update you as to what is happening down here since, you the living, seem to believe we are having it easy lying here forever.

Behind me is Sheila who lost her spirit. Is my good friend, but she can't get over the fact that she is not young and alive. Anyway, one day she decide that she was going to a dance. She fuss over her frock that she claim the maggots them soil up. It is the only one that she have. She dust off the frock and search for the remainder of her hair, only to find that the créme come out of it long time. She was also shock to find out that her shoes them get too big. She attempt in her weak state to get up, but broke her right hip in four places. She bawl all night.

Not getting a chance to do the kumina is her problem. Not satisfied, she sent her spirit to a duppy dance in St Thomas. In the kumina, the spirit lodge in one big, fat woman and decide that it was not coming back because it find flesh. So, Sheila is now contemplating hip-replacement surgery so that she can go find her spirit.

Then, the other night, just as I was about to fall asleep, the mad woman who live nearby the guango tree burst out in one big laugh. Guess what she was laughing about? One long-time joke that she read in a newspaper in 1954. It go like this:

"Several pounds of air are pumped into a nine-year-old schoolboy by two young men, aged 21 and 23, respectively, at a garage on Gold Street in Kingston. He is four times his normal size, and is rushed unconscious to the Kingston Public Hospital where he is injected, massaged and given other emergency medical attention by caring and crying nurses."

From before I come here she reciting that piece, then she would pop some big duppy laugh. I get the feeling that she want me to laugh too. I might be dead, but I not mad.