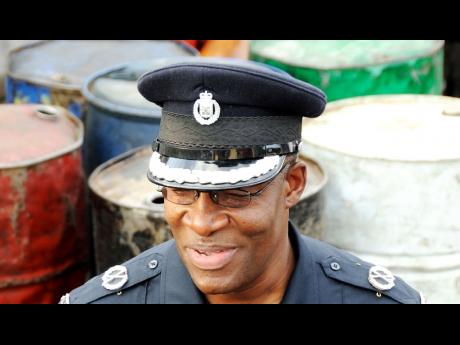 A rare outing by Acting Commissioner of Police Owen Ellington led to the seizure of several drums of petrol and two motor cars on South Avenue in Greenwich Town, St Andrew last Thursday. No arrests were made.

Ellington led a team in an operation to cripple the illegal activity which, despite previous raids, has managed to restart.

The top cop said the illicit activity is a threat to residents' safety.

"It attracts criminals, it will generate criminal in their communities and worst than that, it will expose them to serious safety hazards," he said. "It is illegal in the first place … because this is in a residential community and the safety issues are of great concern. We are going to seize the petrol and the vehicles because persons are refusing to come and claim them."

A Honda Civic and a white Toyota Corolla station wagon which appeared to be filling up on petrol were confiscated by the police.

"This is a crime for profit, it is organised and I think it is a well established operation."

The acting commissioner said thorough investigations will be done to bring persons to justice, which could very well include persons who are hauling petrol from the refinery.

Ellington said he is certain persons will be brought to justice.

"We have found materials here which can easily link us to individuals who may either be the mastermind behind it or were actually purchasing from the people here. They will have to explain why their cars are here with gas tanks open with the keys in the ignition at a place where gas is being sold illegally. Someone will have to account for that," he said.

He made a passionate plea to persons to discontinue their participation in the illegal activity.

"Even though it may be cheaper to purchase petrol from these operations it is unsafe, illegal and should not be done. We want to alert residents if they see things like this happening in their neighbourhoods to report it to the police," he said.

The clampdown operation resulted in scores of onlookers who appeared displeased as they voiced their concerns quietly.

"The whole community a go suffer because a that deh man used to help most people with money," one resident said.