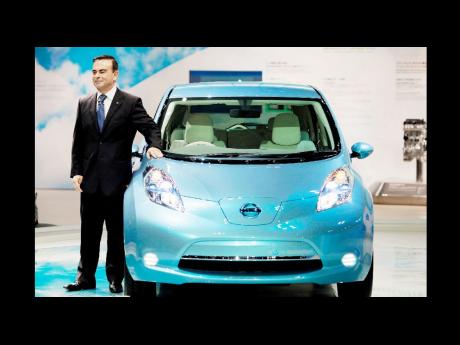 Major automakers have already released or are planning electric vehicles but the experimental designs used in prototypes like Nissan's bubble-shaped Pivo, with its revolving cabin, won't be seen in showrooms anytime soon.

Tokyo-based Nissan's first electric vehicle to go on commercial sale, the LEAF, is set to roll out later this year. It is curvaceous but looks much like a standard gas-engine car.

Electric vehicles can take strange shapes because they don't have a bulky standard engine and the battery can be placed practically anywhere in the frame.

"But we are aiming for the mainstream buyer with the LEAF," the Nissan Motor Co executive in charge of design, Shiro Nakamura, told reporters at the automaker's design facility in the Tokyo suburb of Atsugi. "This is not something for just the niche buyer."

He said electric vehicles will be in their second or third generation, perhaps as much as a decade away, before they take on more futuristic forms.

Nissan is by far the most aggressive on electric vehicles, compared to other Japanese automakers like Toyota Motor Corp and Honda Motor Co.

Automakers plow significant money into design as it's one important way to differentiate cars from competitors producing vehicles that are increasingly alike in performance capabilities and technology.

Nissan's design centre, where about 600 people work, is dubbed an 'imagination factory' by the company. It sports a cutting-edge look with modern furniture, sprawling white walls and huge screens to project car designs.

"When it gets harder to compete in offering the functional value of cars, emotional value is one area where we can still really compete," said Koji Nagano, a Nissan design director. "And that's where design becomes critical."