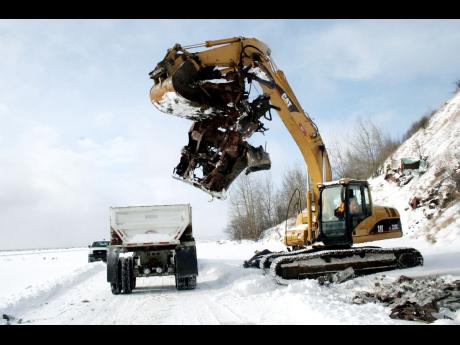 A crane operator picks up an abandoned vehicle during a clean-up session at the auto graveyard in Anchorage, Alaska, last Thursday. - AP

ANCHORAGE, Alaska (AP): When Anchorage had to dispose of thousands of cars and trucks damaged in a powerful 1964 earthquake, it dumped them off a 350-foot (100-metre) bluff near the outskirts of town.

The car dumping didn't end there.

Over the years, the bluff remained a convenient place to get rid of stolen or unwanted vehicles, as evidenced by the 2006 Dodge amid the heap of crumpled, rusted car frames and muffler pipes poking out at odd angles.

But now an effort is under way to pull some of the more than 2,000 vehicles from the bluff and clean up the wildlife refuge below that was established in 1971. So far, workers have removed 60 to 70 cars, 2,000 tyres and about 25 tons of other debris in an all-volunteer effort that began two-and-a-half years ago.

Organisers of the cleanup have come to the realisation that the post-quake dumping wasn't such a great idea after all.

"I'm sure they were just overwhelmed by all the debris they had to take care of," said Shawn Crouse, an employee of a construction company. "At the time, it probably seemed like a logical place to put it."

The vehicles damaged in the quake are packed into the side of the bluff overlooking Cook Inlet, barely concealed under a wind-swept layer of snow and sand, topped with wispy strands of grass.

"That whole bulge in the hillside is where we think there are at least 2,000 vehicles and all sorts of debris," said Joe Meehan, refuge manager for the Alaska Department of Fish and Game. "It is just all solid cars in behind that."

On a recent cold morning, a bulldozer with a hydraulic claw picked up mangled cars and other debris, including a child's bicycle. Another piece of heavy equipment hauled the junkers away.

Part way down the bluff, two cars remained embedded in the bank. The bulldozer just spun its wheels and snapped two cables attached to the cars as it struggled to pull them out.

Curt Abbas, a 62-year-old retired construction supervisor, had to smile when he heard work was under way to remove some of the cars.

"A long time ago, I pushed them over that bank," he said.

Back then, the flat land atop the bluff was a gravel pit and dump. Abbas said he and another guy used bulldozers to push several hundred vehicles over the edge in 1970, when officials wanted the site cleared to build a dirt-bike course.

Sand left over from the gravel operation was mixed with soil to bury the cars. But Abbas said there wasn't enough soil. Now, the sand is eroding, exposing the crushed cars.

Meehan said at least one person has tried to commit suicide by driving off the bluff, going over the edge in a pickup truck.

"He survived the descent down to the bottom and spent the night in the vehicle and the next morning climbed back up the bluff in his underwear, bloodied head to toe," Meehan said.

The dump operated from 1965 until the late 1970s, when the community realised that dumping stuff over the side wasn't exactly environmentally responsible. All sorts of household items were discarded along with autos: wheelchairs, empty beer kegs, lawn mowers, refrigerators, couches, snowmobiles.

Many of the junked cars will have to remain where they are because pulling them out will further erode the bluff.