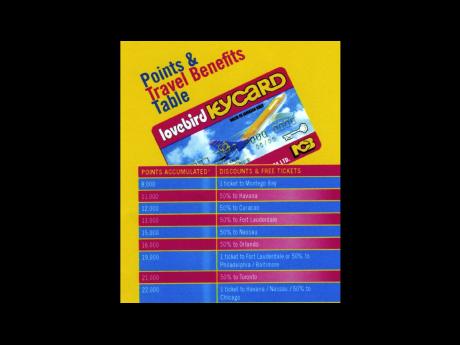 Discussions are ongoing as to whether the Love-bird Keycard, issued by National Commercial Bank of Jamaica (NCB), will survive Air Jamaica's exit from aviation on April 12.

Reward points are racked up on the credit card secure travel - at full or half fare depending on point accumulation - to any destination flown by Air Jamaica.

The points can accumulate for up to two years.

Trinidad-owned Caribbean Airlines Limited is procuring five of the Jamaican carrier's profitable routes - negotiations are due to close March 31 - but NCB says its talks regarding the credit card is with Air Jamaica.

Sheree Martin, the bank's senior assistant general manager for group marketing and communications, said discussions should be wrapped up by the end of the month.

"We are still working with Air Jamaica to finalise the changes to the programme," Martin said via email.

"We will communicate same to all the relevant stakeholders, including our Lovebird Keycard holders, as soon as the terms are finalised. We expect this to happen by the end of March," she said.

The bank's customer-care repre-sentatives, however, are already telling clients that beyond April 12, the reward points would still be valid for travel.

Cardholders are directed to NCB's website for details for routes on which rewards are valid. The 'points and travel benefits table' covers 11 destinations, including Montego Bay.

Informed sources say, however, that Caribbean Airlines is likely to take on only Fort Lauderdale, New York, Philadelphia, and Baltimore in the United States, and Toronto in Canada.

NCB does not disclose credit card subscription numbers, and would not divulge the number of cardholders likely to be affected.

Points are accumulated at a rate of one per $62.50 purchase.

Cardholders can accumulate up to 21,000 points per month and redeem up to a maximum of 252,000 in any one calendar year on any one Lovebird Keycard account.

The minimum number of points that must have been accumulated for the points to be redeemed is 8,000 points.

Points not used up within two years of accumulation are cancelled.