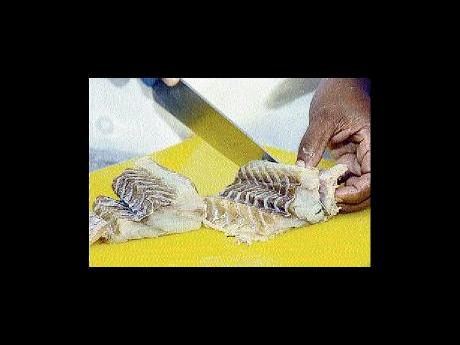 Many Jamaicans are familiar with calypsonian the Mighty Sparrow's famous ballad about the sweetness of salt fish, but few would be aware that while sales of Norwegian cod were tumbling in several parts of the world last year, Jamaicans were happily chomping away in increasing volumes on the breakfast - sometimes lunch and dinner - favourite.

And, the Norwegians noticed.

According to Espen Hanson, Jamaica-based director of the Norwegian Seafood Export Council (NSEC), the savvy marketing and sales body that represents Norway's major seafood-export sector all over the world, Jamaica imported 20 per cent more dried cod last year than it did in 2008.

And as if to vindicate Sparrow's satirical assertion that "big money does run behind it", Hanson told The Sunday Business that the value of last year's import of 5,200 tonnes of the product that has been a staple in Caribbean diets amounted to US$19.85 million.

"Every citizen in Jamaica consumes (approximately) two kilos of salt fish," said Hanson, who is new on the job in Jamaica.

"In 2009, we had about a 20 per cent increase, which is a very positive trend. Jamaicans are using more."

Last year's performance of salt fish sales in Jamaica appeared to have bucked the general trend of a fall-off in business for many products and services, and also in the sales of Norwegian cod and other fish products in other markets.

"Norway's export of cod, saithe, haddock and other codfish reached 336,000 tonnes in 2008. This volume equals the record set for 2007. Price and volume reduction for most cod products resulted in the total value of codfish dropping from 2007," the NSEC said on its promotional website.

The website also quotes NSEC market analyst, Ove Johansen, as saying: "Financial turmoil in our seafood markets has led to a shift from high-priced products of cod to cheaper products. The export value of codfish fell, but at the same time, the volume is maintained."

The NSEC noted that in the first half of 2009, exports from Norway of ground fish, including clipfish, salted fish and stockfish, totalled 4.4 billion Norwegian Krone (NOK), about US$723.3 million. This represented a reduction of NOK643 million, or US$105.7 million compared to the same period in 2008.

Hanson said volume during the six months of 2009 fell by 6,000 tonnes compared to the first half-year 2008 figures.

The Norwegian seafood trade-promotion organisation is trying to further grow codfish sales in Jamaica this year to improve on its 80 per cent market share here.

"We are trying to do some activities to inform the Jamaican consumer about possibilities for salt fish." Hanson said, noting that currently, the council's plans to drive new demand locally include a national promotion of new ways of preparing salt fish meals.

The NSEC official, who recently replaced previous Jamaica branch director, Svein Wara, noted that while more salt fish is consumed per capita in Jamaica than in other larger countries such as Brazil, Portugal and Greece, Jamaicans prepare the fish in a limited way.

Working through a local public relations and events coordinating firm, the NSEC has, over the years, hosted several similar promotions in Jamaica, as it does in some 20 other markets.

Last year, the NSEC hosted outstanding chefs in some of its promotions on a visit to Norway.

"The council has been exploring the limitless possibilities of this nutritious product," it said of its activities here, which have also included sponsorship of several culinary projects, television shows, and participation in the annual Restaurant Week promotion.

"I think our activities in the market have been helping us a lot," Hanson said.

Activities for 2010 will include a week-long Norwegian salt fish culinary adventure competition to be held in the last week of August, which is to be televised.