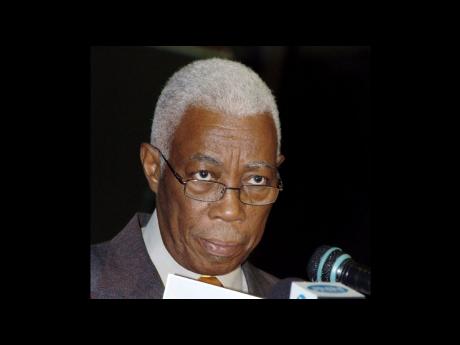 Please publish the following as an open letter to the prime minister.

In the maelstrom that the topical extradition matter has become, there has been an unprincipled (some would say sinister) effort to have me, as the immediate past attorney general and minister of justice, pulled into the whirlpool. I say so as a result of two recent happenings.

The public will get a full grasp of the nature of the first attempt by the following letter that I wrote to the editor of the Sunday Observer last week: "Keen note has been taken of the first sentence of the third paragraph of the story headlined: 'Golding's sternest political test', in your issue of Monday, March 15, 2010. It reads: 'Based on a request, Jamaica's Attorney General and Justice Minister, AJ Nicholson, applies to the Supreme Court for a warrant to intercept all telephone conversations by Christopher Coke'."

It is certainly odd that your 'source' never bothered to point out that requests of this nature moving from the requesting and applying agencies, the security forces, never bear the name of the person whose telephone communication is sought to be intercepted. For common-sense reasons, the name is known only to the security forces when the document is placed before the attorney general.

As I recall, the practice was, and I expect remains, for an 'X' to be placed where the name is to be affixed, so that, for example, the attorney general would not know whether the subject was his relative or his next-door neighbour. So, the rationale is for the security forces to ensure the highest level of secrecy. I had no problem with this.

I draw this to your attention lest there is the impression that an attorney general, past or present, in signing such a request, may be influenced by any oblique consideration, including the name that may appear on the document.

Finally, your 'source' might have made it explicit that the requests come from the security forces lest the further regrettable view be left that they may come from any other quarter.

But then, it depends on the 'source', and the message that was meant to be conveyed.

The nature of the second attempt comes from a statement made by you, Prime Minister, in the House of Representatives that, with respect to the (Presley Bingham) matter, "it languished on the minister's desk until time ran out", and now, according to your party deputy leader at a party political meeting, reportedly to loud cheers, on the minister's desk "lost in papers and he never signed it".

Again, the public should be told the truth, which, of course, is well known within the corridors of Government. When the minister of justice signs a 'Warrant to Proceed', the matter is sent to a magistrate for a warrant to be issued for the subject's arrest and to the director of public prosecutions (DPP), who is the authority designated to present the issues in court. The matter remains out of the hands of the minister, and does not return to his desk, until the DPP sends to him a 'Warrant of Surrender' for his signature.

After the magistrate makes an order that a case has been made out that the person be committed, the DPP, or a prosecutor in his office, has to liaise with the registrar of the Supreme Court to determine whether any further proceedings have been filed on the subject's behalf before he can submit to the minister the Warrant of Surrender. The Extradition Act provides that the outside date for the DPP to submit to the minister such a Warrant of Surrender is two months and 15 days.

The records disclose, and the judgment of the Court of Appeal recites, that Bingham was committed by the magistrate on December 28, 2005, and the Office of the DPP wrote to the registrar on January 25, 2006, to inquire whether he or his attorneys had filed any sort of application. The prosecutor in the DPP's office followed up with the registrar on several occasions by telephone calls for a response to their letter and, eventually, personally attended the offices of the registrar to collect a letter in response, on March 23, 2006. By that time, Bingham's attorneys had, quite appropriately and successfully, applied to the court for a declaration that the two months and 15 days time limit had passed for the minister's signature on the Warrant of Surrender to be sought, and for their client to be surrendered.

Mr Kent Pantry, then at the head as director of public prosecutions, subsequently apologised publicly for the unfortunate set of occurrences. In this, of course, I join him. So, you see, Prime Minister, what you told the Parliament, and what was echoed by your party deputy leader, is not true. The Bingham matter was not "on the minister's desk, lost in papers until time ran out".

Were I the attorney general and, as such, leader of the Bar at this time, I would have invited the solicitor general to clear up these matters in the public domain - matters which I would have regarded as first and second attempt to involve a colleague, untruthfully and regrettably, in the whirlpool that the US-Jamaica standoff has become. That, in all contemplation, would be principle-based action.

In that light, then, Prime Minister, and in light of the society in which we live, in the protection of the constitutional rights of my family and myself, could you find it within yourself to correct your misspeak in Parliament by reading into the record of the House, with appropriate comments, this open letter to you?

Since these are matters that have been placed in the public eye, I ask you to agree with me that this letter should also be made public.

Opposition spokesman on justice, and

leader of opposition business in the Senate.