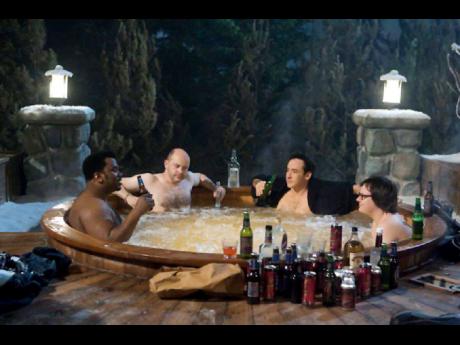 If you had a hot tub that could transport you to any era in time, would you really make a beeline for the 1980s?

That's where the filmmakers headed with Hot Tub Time Machine, a not-so-excellent, dude-where's-my-youth adventure that's occasionally amusing but mostly is as lazy, self-involved and garish as that chintzy decade itself.

The '80s make an easy target, and casting John Cusack, one of the most enduring stars to rise from that decade, adds to the flashback and lends some assurance that you're not forking money over for a hot tub and getting a rusty, leaky old claw-foot tub instead. If this guy signed on, it can't be as dumb as it sounds, right?

Well, Hot Tub Time Machine pretty much is as dumb as it sounds, its goofy but potentially clever concept landing closer to the moronic monotony of Dude, Where's My Car? than the inspired idiocy of Bill and Ted's Excellent Adventure.

Some of the trouble arises from Cusack's castmates in this tale of four losers who travel back to 1986 to settle old scores and do a little messing with the timeline for personal profit.

Cusack is fine, wandering the action like a manic Scrooge who has come back to see how he squandered his early promise with bad choices. As one of his buddies, Craig Robinson captures the same droll charm he brings as the warehouse foreman on The Office.

But much of the story hinges on character actors Rob Corddry and Clark Duke, who overdo everything with a shrillness that makes the movie's crass jokes and gags all the more obnoxious - and a lot less funny than they might have been.

The thin plot centres on three middle-aged buddies grown apart - insurance salesman Adam (Cusack), whose girlfriend just left him; party-guy Lou (Corddry), who has no friends, no job and no prospects; and hen-pecked married man Nick (Robinson), who gave up his music dream and now works in a chic canine-care shop.

With Adam's video-game geek nephew Jacob (Duke) along for the ride, these three take a weekend trip to the ski resort that was the scene of their best times in the '80s.

One drunken night, and presto, Mr Hot Tub Time Machine sends them back to a pivotal night of their youth for a chance to either let time play out the same sad grooves or use their knowledge of the future to create a better past for themselves.

Lizzy Caplan, Collette Wolfe and Lyndsy Fonseca unremarkably round out the cast as some of the women in their lives.

Chevy Chase bizarrely turns up as a mysterious hot-tub repairman, his fleeting scenes so pointless and forgettable they beg the question, was this really one of the biggest stars of the '80s?

Crispin Glover, who co-starred in 1985's time-travel adventure Back to the Future, continually takes over the movie with his weirdly amiable turn as a bellhop who has his own dark fate hanging over him.

Cusack and production-partner Grace Loh are producers on Hot Tub Time Machine, and they brought in Cusack's old high school pal and long-time creative collaborator Steve Pink to direct. Three screenwriters - Josh Heald and writing partners Sean Anders and John Morris - teamed up on the script, which has flashes of humour and a couple of truly hilarious moments.

But the story rests too often on easy '80s potshots - Look, a Jheri curl! Check out those leg-warmers! Can you hear me on my brick cellphone? - and today's parlance falling on deaf '80s ears - email? What's that?

Some chuckles arise out of the soundtrack stuffed with '80s tunes, among them Spandau Ballet's True, Cutting Crew's (I Just) Died in Your Arms and Robinson's cover of Rick Springfield's Jessie's Girl.

The silly title, the Cusack-1980s connection, is a good-hearted spoof of a decade that still brings back a wince of embarrassment for many who lived through it. You just want this movie to be a hot, bubbly nostalgia bath to soak away some of the worries of today's serious times.